Latest NewsCoronavirus
By Ishola Michael - Bauchi On May 18, 2020 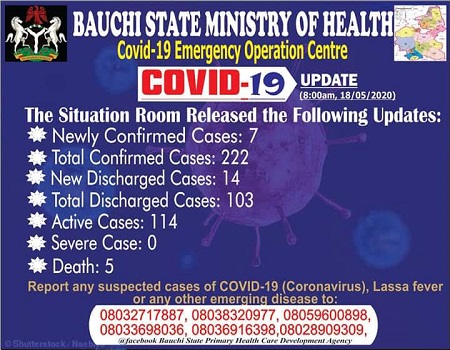 Bauchi State has recorded two more deaths from the COVID-19 pandemic bringing the number of deaths as of Monday, May 18, 2020, to five.

Also, 14 sets of recovered patients are due for discharge any moment from now. Their second test by the NCDC was negative after they had spent weeks under treatment. This brings the total number of patients discharged in the state as of Monday, May 18, 2020, to 103.

Information from the State Ministry of Health COVID-19 Emergency Operation Centre revealed that there are seven new confirmed cases out of the 59 samples sent.

According to information made available to newsmen on Monday, discharged persons based on LGAs distribution showed that the entire 14 are from Katagum.

In summary, the state’s case management committee is handling 114 active patients who are on hospitals admission and properly subjected to medical attention. The total confirmed cases in the state is put at 222.