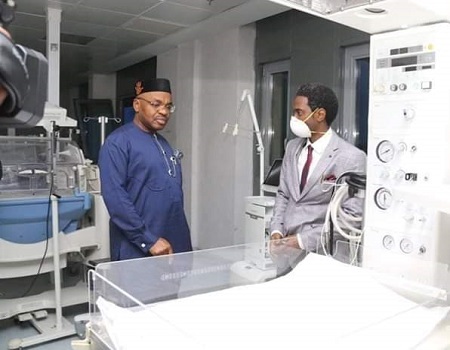 Governor Udom Emmanuel of Akwa Ibom State, on Friday, commissioned a 330-bed space isolation centre
built by the state government at the Methodist Hospital Itok Mbang, near Uyo, the state capital, to curb the spread of the COVID-19 epidemic in the state.

The centre, according to a statement by the state Commissioner for Works, Mr Ephraim Inyang-Eyen, was a speedy response by the government to the outbreak of the virus and the subsequent diagnosed cases, leading to the death of some of its victims in the state.

The commissioner said the centre, completed within 41 days, was built and equipped according to the specification of the Nigeria Centre For Disease Control (NCDC), noting that the construction work commenced on April 7, 2020, and was completed exactly 41 days after.

“We came on April 6, 2020, to carry out the demolition of old structures at this site. We started this project on April 7, 2020, by 9 am. On Monday, May 18, 2020, I officially handed over this project to the state government and today, being Democracy Day, Governor Udom Emmanuel will commission this project,” he said.

Inyang-Eyen further said that the speedy completion of the project did not compromise its quality adding that Concrete Level 30, which he said is the highest level of concrete was used in the construction of the beams and other aspects of the isolation centre.

He said the flooring as made with 6-inch blocks recommended for industrial flooring, adding that the architectural plan of the structure was well mapped out to give procedural entrance and exit for both medical personnel and patients, without giving room for loitering.

“There are four big wards in the isolation centre which can accommodate 75 beds, depending on the size. Each ward has an equal unit of five bathrooms and five toilets with two giant screens for patients’ view from any part of the ward.

“Whether for medical order or call for a meal from the canteen, this will be effected through the use of intercom as no patient is permitted to get to the canteen in person.

However, medical personnel on duty make exit from the four wards properly through a fumigation-cubicle where they will drop their fumigated PPE to be incinerated immediately.

There is a specific entrance and parking space for an ambulance, for effective handling of emergencies and proper management of cases, while other provisions included two laboratories, just as clinical and virology have been completed to meet the NCDC specification.

The commissioner said a canteen to serve the food need within the facility, adding that the isolation centre would be powered from a generating plant, pending the time when it would be connected with a dedicated transformer to the national grid.