Court throws out Evans N300m suit against IGP, others 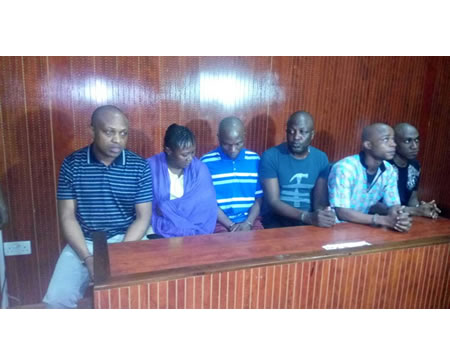 Evans had filed the suit before the court challenging his detention for 11 days before he was finally charged to court.
Justice Anka, dismissed the suit for lacking in merit noting that the Police had a valid court order to detain him for 90 days.
Evans, through his lawyer, Olukoya Ogungbeje, had filed the N300 million fundamental rights suit against the Inspector-General of Police (IGP) alleging wrongful detention.
Joined as respondents in the suit are the Nigerian Police Force (NPF), Commissioner of Police (COP) Lagos State and the Lagos State Anti-Robbery Squad (SARS) as second, third and fourth respondents respectively.
Evans had prayed the court for an order directing the police to charge him to court immediately or release him on bail.
Evans had also alleged that he was subjected to media trial during his arrest.
Ogungbeje argued that Evans’ detention since June 10 to 22, 2017 without being charged to court was a violation of his client’s fundamental rights enshrined in sections 35 (1) (c) (3) (4) (5) (a) (b) and 36 of the Constitution.
However, the police through its counsel, Emmanuel Eze, had urged the court to discountenance Evan’s application and dismiss same, for lacking in merit, as no infraction was committed as claimed by Evans.
Delivering judgment on the suit, Justice Anka ruled that Ogungbeje was unable to argue his case based on Section 35 and 36 of the constitution.
The judge also ruled that the decision of the police to detain Evans from June 10, till June 22, 2017, was reasonable, as the police had told the court that they had a court order to detain him for 90 days.
On the allegation of subjecting the applicant, Evans, to a media trial, the judge stated that the there is no law that can stop the media from carrying out their constitutional duty.
Consequently, Justice Anka dismissed Evans’ suit.
“This suit is hereby dismissed.  All parties have the right of appeal”, Justice Anka ruled.
EvansN300m
Share FacebookTwitterGoogle+ReddItWhatsAppPinterestEmail