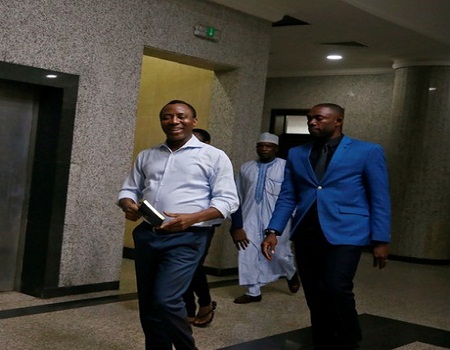 A Federal High Court in Abuja, on Tuesday, asked the Attorney General of the Federation (AGF) and the Minister of Justice, Abubakar Malami (SAN) and the Director-General of the Department of State Service (DSS), Yusuf Bichi, to appear before it on December 23 to give reasons for the continued detention of the convener of the #RevolutionNow protest, Omoyele Sowore by the DSS.

The court, in a ruling by Justice Inyang Ekwo, ordered the duo to appear and show cause why the court should not direct the unconditional release of Sowore from detention.

Justice Ekwo noted that he has seen all processes filed and adjourned the case to 23rd December 2019 for hearing, while mandating the Deputy Chief Registrar of the Court to notify the AGF and DG DSS of the order.

Justice Ekwo also mandated the Deputy Chief Registrar of the court to immediately inform the AGF and the DSS boss of the pending fundamental rights enforcement suit Sowore and his co-defendant, Olawale Bakare, initiated against them.

Sowore and Bakare had in their suit marked FHC/ABJ/CS/1409/2019 alleged gross violation of their constitutionally guaranteed fundamental rights.

They are demanding an aggregate sum of N1 billion from the respondents, as general and aggravated damages for their breached rights to personal liberty, the dignity of a person, fair hearing, and family life, freedom of association and freedom of movement.

Apart from seeking for an order of perpetual injunction to restrain the respondents from further violating their rights, the applicants also demanded a public apology in five national dailies.

At the resumed proceeding on Tuesday, counsel to the applicants, Marshal Abubakar, who is from the chambers of Femi Falana (SAN), told the court of a fresh ex-parte motion filed by Sowore, which prayed for either to be released from detention or be produced by the DSS.

Counsel to Omoyele Sowore also sought an order of the court for the release of the defendant.

He said the move became necessary after the operatives of the DSS re-arrested Sowore at the premises of the court on December 6 and had since been detained without charged to court.