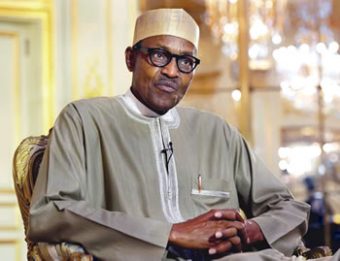 A Federal High Court sitting in Abuja on Thursday struck out the suit challenging the eligibility of President Muhammadu Buhari to contest for the office of President of Nigeria on the ground that he lacks the academic qualifications to do so.

The trial Judge, Justice Adeniyi Ademola struck out the suit following a notice of withdrawal of the matter by an Abuja-based legal practitioner, Nnamdi Nwokocha-Ahaiwe, who filed the suit challenging Buhari’s eligibility to contest the presidential election.

Justice Ademola, who gave no order, striking out the suit without cost had yesterday, deliver a ruling on an application asking the court to stay execution of the decision of the court made earlier against the defendants.

Defendant’s counsel, Paul Ajiboye, did not oppose the application, though he complained that he was not served.

In view of the non objection to the application for dis-continuance of the matter by the defendant, Justice Ademola then went ahead to strike out the suit.

The plaintiff, Nwokocha-Ahaiwe, had filed an application asking the court to nullify the election of Buhari as President of Nigeria on the grounds that he did not possess the minimum academic requirement for the position.

He also alleged that Buhari did not sit for the Cambridge West African School Certificate (WASC) in 1961 as he had earlier claimed.

Buhari had raised a preliminary objection to the suit on the grounds that he was not properly served with the processes of the court in the matter.

In the preliminary objection of the President, he challenged the mode of service of the originating summons on him, insisting that he ought to have been served at an address in Kaduna instead of by substituted means at the national secretariat of the All Progressives Congress (APC) in Abuja.

Justice Ademola, however dismissed the preliminary objection on the grounds that it was incompetent and upheld the service of the originating court processes on Buhari by substituted means.

Ademola said the service of the court’s processes on the President through the secretariat of the APC was proper.

Not satisfied with the court’s ruling, Buhari took the matter to the Court of Appeal, asking that the court to set aside or discharge the ex-parte order granted in favour of Nnamdi Nwokocha Ahaaiwe on February 16, 2015 to serve him with the originating summons by substituted means.

The President also prayed the court to make an order setting aside the respondent’s (Ahaaiwe) originating summons for being incompetent.

Following the appeal, Justice Ademola had adjourned the matter sine die (indefinitely) as the Court of Appeal has seized of the matter.

The academic qualification of the president became an issue mid-way into the campaigns of the 2015 general election where it was alleged that he did not possess the West African School Certificate, a major prerequisite for contesting the presidential election.

Buhari, was alleged not to have included his West African School Certificate among the documents he tendered to the Independent National Electoral Commission (INEC) in the build up to the election on the grounds that the said document was in the custody of the military board.

However, the military‎ board had since denied this claim by the president.