Court strikes out suit against Buhari over appointment of CJN 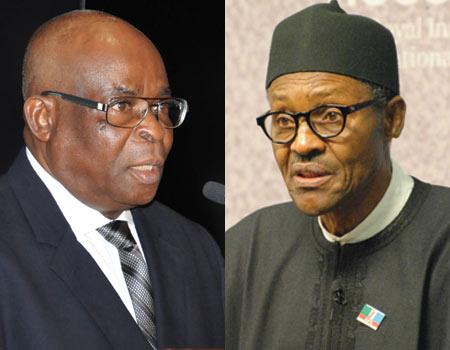 A suit seeking the interpretation of parts of Section 23 of the 1999 Constitution regarding the appointment of the Chief Justice of Nigeria (CJN) and the powers of the President has been withdrawn and struck out by a Federal High Court in Abuja.

The plaintiff, Malcolm Omirhobo had dragged President Muhammadu Buhari and the Attorney General of the Federation (AGF) and Minister of Justice, Abubakar Malami (SAN), before the Federal High Court, Abuja, over the appointment of a substantive CJN and the principle of power separation.

The plaintiff, a legal practitioner based in Lagos, through his counsel, Mrs. Chinwe Okpala sought the court to interpret Section 231(1), (3), (4) and (5) of the 1999 Constitution as amended.

President Buhari and the AGF were sued along with the Federal Judicial Service Commission (FJSC), Justice Walter Onnoghen and the National Judicial Council (NJC) as the First, Second, Third and Fifth defendants respectively in the suit with number FHC/ABJ/CS/1019/16.

He noted that the circumstances of the case had been overtaken by events and that the remaining 14 prayers were anchored on counts 11 and 12.

The trial Judge, Justice John Tsoho, admonishing Omirhobo for his action in conceding to the prevailing circumstance therefore struck out the matter.

Counsel to the Fifth Defendant, Y. M. Ede, earlier submitted that all prayers had been answered where he further described the matter as academic and hypothetical.

He insisted that the President did not hand pick the CJN but had followed due process, such that the prayers of the plaintiff had already been answered by the appointment of Justice Onnoghen.

The plaintiff, in his prayers, asked the court to determine whether the qualification, assessment and evaluation necessary for the appointment of the CJN are the exclusive reserve of the FJSC and the NJC.

He also asked the court for the interpretation of, and whether by virtue of Section 231 (1) of the 1999 Constitution (as amended), the President in exercising his powers in appointing the CJN must act in recommendation of the NJC and not on his own discretion.

Similarly, the plaintiff also asked the court to determine whether the CJN and Justices of Superior Courts of Records and Magistrates as well as other judicial officers in the country hold their offices at the pleasure of the President.

The plaintiff therefore urged the court to make declaration that the qualification, assessment, and evaluation necessary for the appointment of CJN is the exclusive reserve of the FJSC and the NJC.

Similarly, he asked the court to declare that the President cannot hand pick nor choose who he wants to be the head of the judiciary except as demanded by the Constitution.