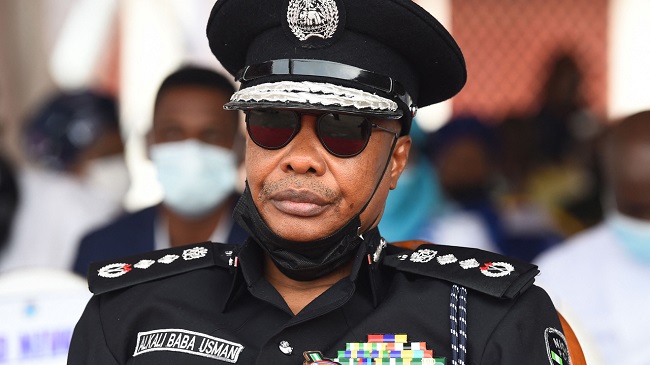 A Federal High Court sitting in Abuja has sentenced the Inspector-General of Police (IGP), Usman Baba to three months imprisonment for disobeying a valid order of the court.

The trial Judge, Justice Mobolaji Olajuwon made the order on Tuesday in a ruling on a suit filed by Patrick Okoli, a former police officer who claimed he was unlawfully and compulsorily retired from the Nigerian Police Force.

The Judge held that the IGP should be committed to prison and detained in custody for a period of three months, or until he obeys an order of the court made on October 21, 2011.

Okoli, in a suit, marked: FHC/ABJ/CS/637/2009 with the I-G as a sole respondent prayed the court to order his reinstatement, on the ground that, he was unlawfully retired in 1992 by the Police Council, presently known as Police Service Commission (PSC), while serving in Bauchi State Command as a chief Superintendent of police, among others.

He said his compulsory retirement, under Decree 17 of 1984, was illegal and Justice Donatus Okorowo, in a judgment delivered on October 21, 2011, directed the I-G to comply with the orders of the PSC, as contained in their letter of 5th May 2009 (with Ref. No. PSC/CSP/01/11/295A), directing him to reinstate Okoli into the Nigeria Police Force and to present for the recommendation of the commission, the I-G’s recommendation for the promotion of the applicant from 2013 to date, among others.

Following non-compliance with the judgment, Okoli’s counsel, Mr Egbo, filed Forms 48 and 49 supported by an affidavit before Justice Olajuwon, praying the court to convict and sentence the I-G for failure to obey court judgment delivered by Justice Okorowo on October 21, 2011.

The lawyer urged the court to grant their application on the grounds that the I-G disregarded a memo of legal advice by the PSC advising him to take cognisance and obey the court judgment.

Delivering the ruling, Justice Olajuwon held that Baba, whose attention severally and through different quarters has been brought to the orders of the court, mandating him to give effect to the directives of the PSC had not denied having the knowledge of the orders.

The Police boss, the judge said, had blatantly refused to carry out the order of the court, adding, “This court has bent backwards over and over again for the respondent. This Court even ordered that the Assistant Chief Registrar (Litigation) wrote to the respondent to inform him of the pendency of this matter, which he did and the proof of receipt of same in the office of the respondent is before this court.

“It is unfortunate that the chief enforcer of the law is one who has deliberately refused to comply with the same law. It is important to state that obedience to orders of the court is fundamental to the good order, peace and stability of a nation. It is a duty which every citizen, who believes in the peace and stability of the Nigerian state owes the nation and the court has a duty to commit the individual who has failed to carry out the order of the court for contempt, so as to prevent the authority and administration of law from being brought to disrespect and to protect the dignity of the court,” she said.

According to her, court orders are not to be obeyed at the whims and caprices of the respondent and the rule of law is only supreme when parties, no matter the status, obey the court order.

“This court Is satisfied that the respondent (presently and those before him) has had proper knowledge of the Orders of this Court, there is no denial of such knowledge and the receipt of Forms 48 and 49. The refusal and failure of the respondent to comply with the orders of this court have been proved in this case.

“The respondent, in this case, the Inspector General of Police, in the person of Usman Alkali Baba, is to be committed to prison and detained in custody for a period of three months or until he has obeyed the order of this court, made on the 21st October 2011.

“If at the end of the three months, the contemnor remains recalcitrant and still refuses to purge his contempt, he shall be committed for another period until he purges his contempt,” Justice Olajuwon ruled.

Three weeks after the  Independent National Electoral Commission, ( INEC)  Area offices in Abeokuta and Ede in Ogun and Osun States, respectively were set ablaze, the Commission has suffered another attack…

The Governor, Central Bank of Nigeria (CBN), Mr Godwin Emefiele has insisted that it does not matter how Nigerians describe the newly redesigned naira notes…