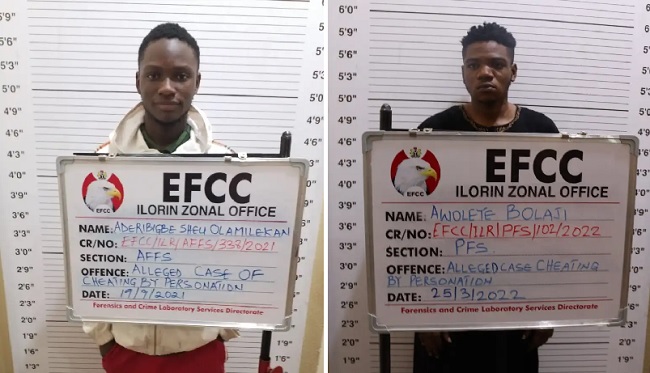 The Ilorin zonal command of the Economic and Financial Crimes Commission (EFCC) has secured the conviction of one Aderibigbe Sheu, a student of Kwara State University (KWASU), Malete, for posing as a widow resident in the United States of America (USA) to defraud unsuspecting victims.

In a statement by Head Media and Publicity of the antigraft agency, Wilson Uwujaren, Aderibigbe, a native of Osogbo, Osun state, was one of the 30 suspected internet fraudsters arrested in Malete, Moro local government area of Kwara state on September 19, 2021, during a sting operation by operatives of the EFCC.

He was charged by the anti-graft agency on one count of cybercrime and retention of proceeds of crime before Justice Muhammed Sani of the Federal High Court sitting in Ilorin.

Upon arraignment on Wednesday, June 1, 2022, the defendant pleaded guilty to the charge.

Following his ‘guilty plea’, counsel to the EFCC, Rasheedat Alao, reviewed the facts of the case and tendered the extra-judicial statements of the defendant including the phone, laptop and other incriminating materials printed from his devices, which were admitted in evidence.

She urged the court to consider the guilty plea of the defendant, his extra-judicial statements, and all the exhibits tendered to convict the defendant as charged.

In his judgment, Justice Sani having held that the court is satisfied with the evidence before it pronounced Aderibigbe guilty of the charge and sentenced him to three years imprisonment with an option of N982,403. The court also ordered that the iPhone 7+ and laptop, which were used to perpetrate the crime be forfeited to the Federal Government.

In the same vein, Justice Sani, on Thursday, convicted one Awoleye Bolaji, who claimed to be from the Oke-Ogun area of Oyo State on an internet fraud-related offence.

Awoleye allegedly posed as one Karan Vanslack, an American lady, with the intent to defraud unsuspecting victims in contravention of Section 22 (2) (b)(ii) of Cybercrime (Prohibition Prevention) Act, 2015.

Upon the guilty plea by the defendant, Counsel to the EFCC, Sesan Ola, reviewed the facts of the case and tendered one iPhone 6, the statements of the defendants and all the fraudulent messages printed from his device, which were admitted in evidence.

Justice Sani sentenced the defendant to one-year imprisonment with an option of fine of N100,000 (One Hundred Thousand Naira Only) and ordered that the iPhone 6 which he used to perpetrate the crime be forfeited to the Federal Government.