Court revokes Nnamdi Jami’s bail, orders his arrest, to be tried in absentia 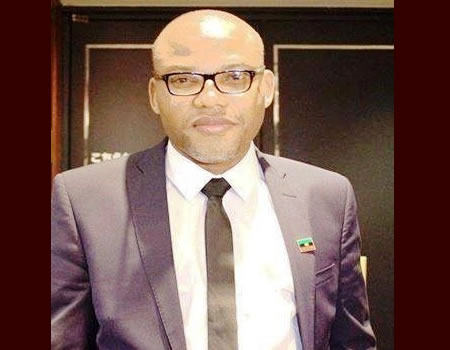 Justice Binta Nyako of the Federal High Court sitting in Abuja on Thursday revoked the bail granted the leader of the proscribed Indigenous Peoples of Biafra (IPOB), Nnamdi Kanu and issued a bench warrant for his arrest.
The trial court judge also ordered that the trial of the lPOB leader, who has absconded from the country since last year will continue in his absent.

Justice Nyako recalled in her ruling that the court admitted the defendant to bail April 25, 2017 on health ground, but the defendant had failed to attend trial since November 2017 prompting the court to issue an order directing his sureties to deposit the sum N100 million bond with the court Registrar and to show cause why they should not forfeit the money to the federal government if they fail to produce Kanu.

The Judge then adjourned further trial of the IPOB leader till June 18, 2019 in his absence.

The court’s order for the arrest of Kanu followed an application by the prosecution counsel, Shuaibu Labaram for a bench warrant of arrest.

In his response , the defence lawyer, Ifeanyi Ejiofor had requested for a short adjournment to enable him give reasons why the defendant was not in court.

His request was overruled by the Court on the ground that the defence team had enough time to adduce reasons for Kanu’s absence in between the four adjournments granted them by the court from November 2018 till yesterday.

Meanwhile, the court had adjourned the case involving Kanu’s sureties: Senator Enyinnaya Abaribe , a Jewish Priest Emmanuel Shalom Ben Madu and an accountant Tochukwu Uchendu indefinitely following an appeal lodged by counsel to Senator Abaribe , Chukwuma Machukwu Ume (SAN) challenging the order of the court directing the sureties to deposit their bond with the Court.

However, following the disappearance of Kanu and his subsequent failure to attend his trial, the Federal government, through the prosecution counsel applied and secured a court order directing Kanu\’s sureties to ‎produce him in court or to show cause while they will not be sent to prison.

2019 polls: INEC ready to give account of all returns — Igini, Akwa-Ibom REC