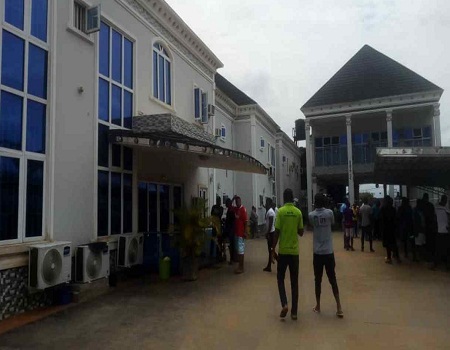 The Edo State Ministry of Physical planning and urban development, on Wednesday, was restrained by Justice Dan Okungbowa from demolishing or altering T Latifah hotel located at Ugbor, G.R.A area of the metropolis pending the determination of the motion on notice.

The State Commissioner of Police, Edo State government and Edo State Attorney General and Commissioner of Justice were also restrained from demolishing the edifice, the property of Mr Tony “Kabaka” Adun, a former aide to the national chairman of the All Progressives Congress (APC), Comrade Adams Oshiomhole.

The trial judge issued the order following an interlocutory order in a suit marked B/151c/05/2019 and brought before the court by Adun, a former youth leader of APC in the state.

Meanwhile, youths loyal to Adun popularly called Kabaka have made a passionate appeal to Governor Godwin Obaseki to pardon him over his utterances and renege on his proposed demolition of the hotel.

The youths gathered at the hotel as early as 9 am to sympathize with Adun who was visibly disturbed by the notice of demolition of his property.

One of the spokespersons, Mr Charles Uyiekpen from Ikpoba-Okha local government area said the governor should show compassion on Kabaka no matter his offence.

Uyiekpen said that the demolition of the building will only increase the level of unemployment in the state noting that the hotel has been able to put foods on the tables of the citizens of the state.

“I came all the way from Ikpoba-Okha Local Government when I heard of the news to sympathize with him.

“He is a lovely man, he is good to everybody and he is helping us to take care of even youths at Ikpoba-Okha Local Government.

“When you see him, he is really a good person. I do not politics but because he is a very kind brother to us and that was why we came out.

“He was surprised to see us this morning that we came from Ikpoba-Okha to come and stay with him.

“All we are saying is that the governor should please, because if he does anything to this compound, is going to affect all the youths in Edo State, including the workers.

“It is going to affect all the youths in Edo State because he gives alms to all.

“He is my younger brother. That is why I am here. I am begging the state governor to please, assist him and allow the house to remain.

“Have mercy, no matter what he has done, he should have mercy on Tony Kabaka. He is a very good man”, he pleaded.

On his part, Mr Tony Kabaka while pleading with the state government to temper justice with mercy, said the said property has the Certificate of Occupancy and that there is already a court injunction restraining the government for pulling down the building.

“You see, this is my deal of transfer that I used to buy the property. This is the signature, this the Oba’s approval. You see, it is not today, this is the signature of the Surveyor-General of the state. So, you can see he signed it himself”, Adun said