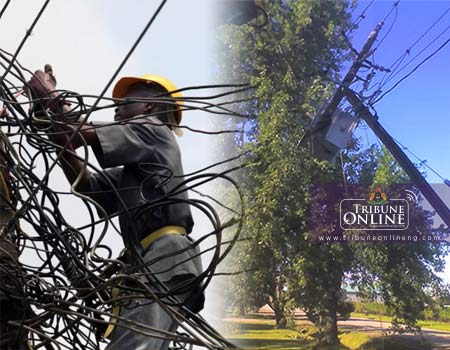 TWO men, who allegedly engaged in illegal reconnection after being disconnected by an Ikeja Electricity Distribution Company (IKEDC), on Monday, appeared before an Ikeja Magistrates’ Court.

The two men, Kazeem Tajudeen, 51, an electrician and Oluwaseyi Akintunde, 38 and a civil servant are residing at No. 10 and No. 8 Gbite Street, Bamako Estate in Aguda-Ogba in Lagos.

The defendants are facing a three-count charge of misdemeanour, assault and breach of peace.

The Prosecutor, Sgt. Mike Unah, said that the defendants committed the offences on Jan. 27 at about 2.30 p.m at Bamako Estate.

“The defendants assaulted the complainant Mr Bamise Opanuga, an IKEDC official, by obstructing him from discharging his lawful duties.

“The defendants again conducted themselves in a manner likely to cause a breach of the peace by illegally reconnecting electric wire which the IKEDC, Ojodu Branch, disconnected without permission,’’ he said.

Unah said that the defendants’ acted in such manner likely to cause a breach of peace.

They, however, pleaded not guilty.

The Magistrate, Mr A. A. Fashola granted them a bail of N200,000 with two sureties in like sum.

The offences contravened Section 174 of the Criminal Law of Lagos State, 2015 (Revised).

Fashola adjourned the case until March 19.