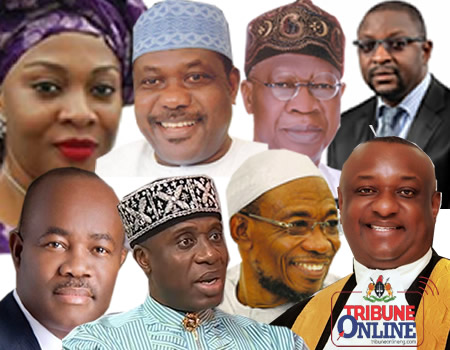 Justice Taiwo Taiwo of a Federal High Court sitting in Abuja on Monday refused to grant an application seeking to restrain President Muhammadu Buhari from inaugurating the ministerial nominees that were recently cleared by the Senate.

The Judge, in his ruling, dismissed the ex-parte application filed by a legal practitioner, Musa Baba-Panya, wherein he prayed the court for an order stopping the inauguration of the ministerial nominees.

Justice Taiwo said he will prefer to hear the substantive suit and give a formal judgment rather than granting interim restraining orders as sought by the plaintiff.

He ordered the plaintiff to effect personal service of the originating and other processes so far filed in the case on the defendants and return for a date for the commencement of the hearing.

The grouse of the plaintiff is that the President’s non-nomination of an Abuja indigene as a ministerial nominee was disobedience of a subsisting judgment of the Court of Appeal.

Baba-Panya claimed that the Court of Appeal, in the judgment delivered on March 15, 2018, in Abuja, held among others, that Abuja possesses the status of a state and should be so treated.

According to the plaintiff, since the Constitution stipulates that every state of the federation should produce a minister, Abuja deserves to also be considered.

Baba-Panya joined President Buhari and the Attorney General of the Federation (AGF) and Minister of Justice as defendants in the case.

In suit number: FHC/ABJ/CS/878/19, Baba-Panya, who is also an indigene of Karu in the Federal Capital Territory (FCT), said the president’s action was contrary to an Appeal Court judgment delivered on March 15, last year.
Recalled that President Buhari had fixed August 21 to inaugurate the 43 ministers-designate earlier confirmed by the Senate.
But the plaintiff, who argued in his application that the Appeal Court’s ruling was a compelling order, said it was served on the president through the AGF.
According to the Plaintiff, in an originating summons dated August 7 and filed August 8, “the 43 confirmed ministerial appointees now awaiting swearing-in or inauguration as the Federal Executive Council is incomplete, illegal, unconstitutional, null, void and of no effect whatsoever”.
He also argues that President Buhari stands in contempt of law and court for his brazen refusal to comply with the judgement of the Abuja Division of the Court of Appeal and prayed the court to grant an interim injunction restraining the president from inaugurating the confirmed ministers-designate pending the determination of the motion on notice.
He said allowing the president to go on with his decision would mean that “he is going to constitute an illegal cabinet”
According to him, the violation of the FCT indigene’s rights to ministerial representation has been going on since May 29, 1999, “So it is not a personal issue. All previous presidents have also violated our rights”.
He said he had a substantive suit which seeks 12 reliefs and five issues to be determined.

NGO offers healthcare to 300,000 under-5 children in Benue