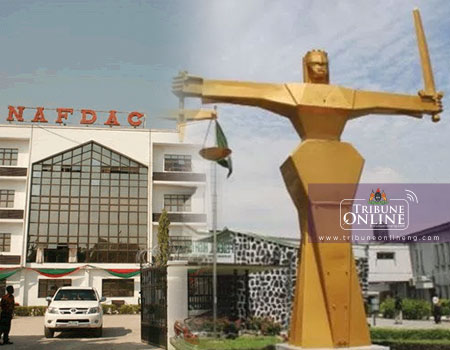 A Lagos State High Court has ordered that The National Agency for Food and Drug Administration and Control (NAFDAC) to pay a fine of 2 million naira for approving Sprite and Fanta, products of the Nigeria Bottling Company (NBC).

The court also dismissed NBC’s application filed before the court seeking a stay of execution of the judgement where it was asked to include on its label a warning to consumers against taking Sprite and Fanta with Vitamin C.

The judge ordered the agency to pay the money into an interest yielding account in the name of the Chief Registrar of the court pending the hearing and the determination of the appeal filed by NAFDAC.

Justice Oyebanji had observed that contrary to the argument of NBC that its business interest would be adversely affected if the order is not stayed.

“It is imperative to add the resultant effect of the order sought to be stayed is the preservation of human life, the business interest of Nigeria bottling company cannot in my respected view take precedence over public health.”

“It is beyond argument that if the application for stay is granted and human health is consequently adversely affected, it is most unlikely that there can indeed be a return to status quo.”

“The importance of public health is clearly demonstrated and underscored by the constitutional provision in section 45 thereof.”

“For the reasons herein adumbrated, it seems to me it manifests that Nigeria Bottling Company has failed to disclose any special circumstances which would warrant the grant of this application.”

The ruling was sequel to an application filed and argued before the court by a Lagos lawyer T.A. Busari SAN on behalf of NBC, urging the court to stay the execution of the judgement of the court.

The lawyer premised it on the ground that, the order made by the court would adversely affect the operation of the company if the execution of same was not stayed pending the outcome of the appeal filed by the company.

It would be recalled that in a judgement delivered by Justice Adedayo Oyebanji on the 15th February 2017, the court had ordered NAFDAC to forthwith mandate Nigeria Bottling Company PLC to include on all bottles of Fanta and Sprite soft drinks manufactured by the company a written warning that the content of the said bottles of Fanta and Sprite soft drinks cannot be taken with Vitamin C as same becomes poisonous if taken with vitamin C.