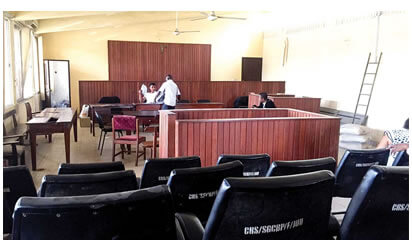 Chief Magistrate T. Oladiran of the Chief Magistrate Court 1 sitting at Iyaganku, Ibadan, has dismissed a three count charge of conspiracy and forgery filed against five people including a 72 years old lawyer and acquitted the four defendants on each of the three count charge.
The suspects aside the lawyer include a professor, a doctor, a secretary and wife of the owner of the will were all arraigned on a three-count charge of forging and uttering the will of a deceased professor before the court in March. The five acquitted people are 72years old lawyer, Mr Fasomo Falola; 41 years old, Mrs. Akangbe Olubunmi who is the secretary, and a 71-year-old Olubunmi Amusa, wife of the deceased, 70 years old Prof. Adedoyin Soyibo and 70years old Dr. Junaid Olaniyi Ogundiran.
They all pleaded not guilty and the prosecution led by Sergeant Oriola James had called a witness to testify in the matter. But at the last hearing of the suit delineated MI/318C/2017, the prosecutor had told the court that the complainant who testified earlier in the suit had written a letter to withdraw the case for peace to reign, adding that as a result of the letter which was supported by a sworn affidavit, he will be withdrawing the suit so as not to belabour the court
In response to the prosecution’s application, counsel to the first and second defendant, Kolawole Esan Esq., told the court that the prosecution has a right under the criminal procedure law to withdraw the matter, adding that such a charge is not supposed to be brought to court as it is a calculated attempt to embarrass the defendants.
Counsel to the third defendant, Sanyaolu Akinyele Esq., supported Esan’s view but added that there must be a restitution to all the defendants and urged the court to award the sum of N100, 000 to each of the defendant as restitution to stop anyone that does not have a good case to stop writing frivolous applications against innocent people.
But Kazeem Gbadamosi representing the fourth defendant asked only for his client to be discharged and acquitted, adding that regarding restitution, Islamically, he only wants things that will bind the family together while counsel to the fifth defendant, Ranti Ajeleti, also asked for restitution of N100, 000 and further asked the court to indict the police for doing a dirty job
Magistrate Oladiran granted the requests to discharge and acquit the defendants but though the defendants may be entitled to restitution or any other form of compensation, the defendants, who are all eminent personalities should be satisfied with the voluntary withdrawal of the case by the complainant as the proof of evidence is tailor minded and police did not display professional competence.

“The complainant stated that she wants to withdraw the case due to intervention of highly respected members of the society and for peace to reign. This matter originated from a family issue and any restitution awarded will not foster peace but cause more problem.
“It is therefore my humble view that in other to allow peace to reign in the family, the defendants should not expect or demand for any restitution. They are more than any amount that would be awarded. Accordingly, the prayer for the restitution is refused,” the court held.
Also on the issue of indicting the police, Magistrate Oladiran held that he has not had the opportunity of seeing other statements by other witnesses proposed to be called and that of the defendants and ruled that, “I cannot at this stage pass any comment on the performance of the police. I leave that for other day in another case.”
conspiracycourtForgery
Share