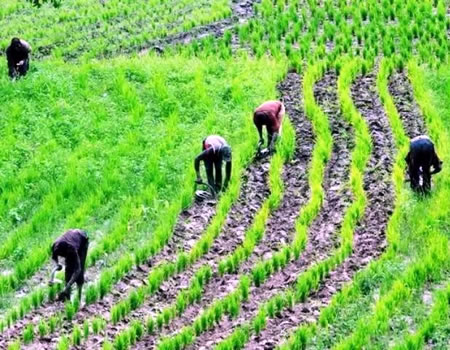 Dr Eni-Uduma Chima, Chairman of the local government, made the disbursement and distribution of other vital farm inputs to the beneficiaries on Friday at the council’s secretariat at Nguzu, Edda.

The News Agency of Nigeria (NAN) reports that 2, 200 rice farmers selected from the 11 political wards in the council benefitted from the loan facility, sponsored by the Ebonyi Government under its agricultural sector development policy.

Chima who addressed the beneficiaries said that the initiative was part of the state government’s programme towards boosting rice production in the state.

He said that 200 rice farmers were selected from each of the 11 wards in the council, adding that each beneficiary would receive N25,000 loan.

He said that each profiled farmer was entitled to a loan of N25,000 from which the beneficiaries might on their volition choose to buy any of the farm inputs at a subsidised price from the council.

“Farmers will also receive high yielding improved rice seedlings to help them to increase their yields.

“The beneficiaries are expected to pay back the loans with 10 per cent interest after one year or pay remitting quantities of rice equivalent of the loan,’’ he said.

Chima urged all the beneficiaries to make good use of the loan and other farm inputs they received to boost their production and to repay their loans at the stipulated time.

“We have bags of NPK 20:10:10 fertilizer and the same number of urea fertilizer; we have 950 cartons of herbicide and spraying tanks which we procured for distribution.

“Each of the profiled farmers is entitled to N25000 from which voluntarily they may decide to buy any of the inputs from us.

“If you are buying NPK fertilizer which sells for N5500 in open market, the government will give you at the rate of N4500 and urea goes for N6000 instead of N7000 at the open market.

“The governor said that we should reduce the price and that is what we have done,’’ Chima said.

Mr Thomas Ude, one of the beneficiaries who spoke to NAN, expressed joy over the distribution which he said, came at the pick of rice cultivation.

He commended the council chairman and Gov. Dave Umahi for the gesture, promising that the beneficiaries would make adequate use of the loan and other inputs to increase their rice yields.