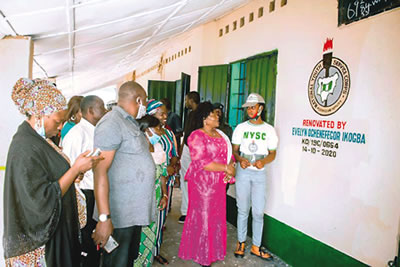 A corps member, Evelyn Ikogba, who is an indigene of Delta State, has renovated a block of dormitory at Borstal Correctional Institute, Kaduna State.

The project, which was largely described as an act of commitment to community development, was completed in two months.

Ikogba, with the state code number KD/19C/0664, said she had always been passionate about helping humanity.

She renovated a large and spacious block of dormitory, which comprises four large rooms, eight toilets, eight bedrooms and a septic pit.

“During the lockdown in 2020, I felt a need to reach out to those isolated from the outside world. That made me to dedicate time to research about juvenile correctional centres in Nigeria. My attention was drawn to the one in Kaduna, as it was the place of my national youth service,” she said.

The Mass Communication graduate of the University of Benin said she was touched by the deplorable state of the hostel when she visited the institution and in reaction, wrote proposals to source funds as part of her Community Development Service (CDS) under the NYSC scheme.

She said she was determined to get the project done in order to help improve general hygiene in the dormitory as well as encourage inmates to respond to reformative programme of the institution.

Ikogba added that there was so much more she could do to impact lives if given the opportunity, as she believes that it takes a collaborative effort of both the government and its citizens to build a nation.