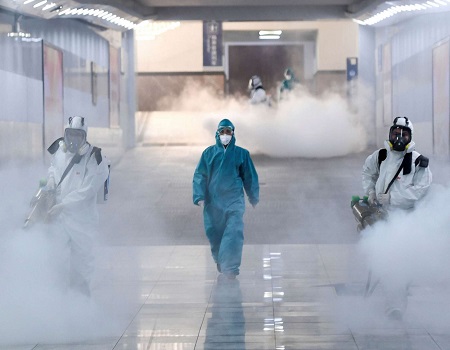 The number of patients infected in China with the new coronavirus has reached 20,438, as Hong Kong reported its first death from the disease, authorities said yesterday.

More than 20 countries have confirmed cases of the virus, prompting the World Health Organization (WHO) to declare a global health emergency, several governments to institute travel restrictions, and airlines to suspend flights to and from China.

But it has continued to spread with Singapore, Malaysia, and Thailand on Tuesday reporting new infections that were not imported from China.

Hong Kong authorities reported the first death of a coronavirus patient in the semi-autonomous territory on Monday. The victim had travelled to Hubei in January and had underlying health issues, according to the South China Morning Post.

This was the second coronavirus death outside of mainland China after the Philippines reported death at the weekend. The news prompted President Rodrigo Duterte to call for a ban on travellers from China, a measure similar to those already taken by Singapore and the United States.

Taiwan announced on Tuesday it would bar entry to all foreign nationals who have visited China over the past 14 days. The measure did not apply to Chinese nationals and Hong Kong and Macau residents.

Chinese medical authorities said on Monday that they were expecting the outbreak to reach a peak within 10 to 14 days, longer than initially estimated.

Foreign governments continued evacuations from Wuhan, where the outbreak originated.

ALSO READ: Turkey says no intention for conflict with Russia after Idlib attack

A Belgian citizen repatriated from Wuhan has been infected with the coronavirus, Health Minister Maggie De Block announced on Tuesday, according to the Belga news agency, in the country’s first confirmed case.

A flight carrying 107 Malaysians evacuated from Wuhan landed at Kuala Lumpur International Airport on Tuesday. All the evacuees, as well as crew and accompanying diplomats, were quarantined for 14 days.

The same day, Malaysia’s Health Ministry announced two more cases of the virus, including the first involving a Malaysian national. Malaysia’s nine other confirmed cases were all Chinese visitors, according to Health Minister Dzulkefly Ahmad. The infected Malaysian had travelled to an international conference attended by a Chinese delegation in Singapore, where 24 cases of the virus have been confirmed.

Singapore announced four cases of local transmission of the coronavirus on Tuesday.

Thailand’s Health Ministry confirmed an additional six cases of the virus, bringing its total number of cases to 25.

In a preventive measure, Vietnam is now planning to mobilize its military to prepare for a massive quarantine operation for thousands of Vietnamese returning from China including 950 people in Hanoi, 1,400 in six central provinces and 2,000 in Lao Cai, the northern border province.

The government in the semi-autonomous Chinese territory of Macau has decided to close casinos for two weeks to prevent the further spread of the virus. Macau also scaled back public services and public transport and appealed to residents to stay home unless they needed to go out to buy food.

The eastern city of Hangzhou also announced recommendations to curb the spread of the disease, including asking residents to wear masks outside and assign a family member to go shopping every two days.

In a move to further health security, German Health Minister Jens Spahn tweeted he had met with his British counterpart, Matt Hancock. Twelve cases have been confirmed in Germany.

China’s Politburo Standing Committee, a top ruling body, said the outbreak was “a major test of China’s system and capacity for governance,” according to Xinhua news agency.

The committee said the crisis exposed “shortcomings and deficiencies” in the national emergency response system and called for the strengthening of public health care.

The government has been criticized for delaying the initial announcement of the disease, which experts believe might have led to a wider spread of the virus.

Authorities initially tried to silence doctors in Wuhan who were sounding the alarm about the new virus. The Supreme Court last week chastised police over the crackdown.