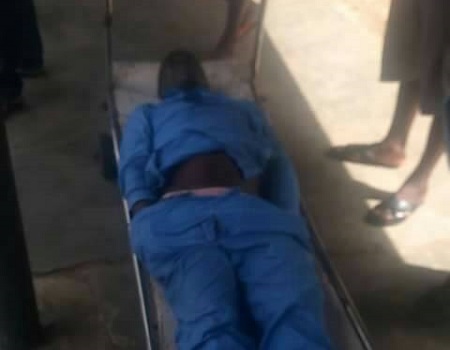 CONTROVERSY now trails the alleged death of a prominent community leader, Chief Lucky Ayomanor, in the custody of the Nigerian Police in Sapele, Delta State, on Wednesday night.

Chief Ayomanor was said to be on a visit to his elder brother at about 9:00pm in his SUV to Gana area of Sapele when he was accosted by some policemen in a stop-and-search operation.

The police operatives were said to have found a fully loaded revolver in his car during the stop-and-search operation.

He was subsequently detained at the Police Station in Sapele only to be pronounced dead the following morning.

The police said he fainted in their custody and was rushed to a nearby hospital where he died.

“Police found a fully loaded pump action gun in his car and when the police demanded the licence, he could not provide it.

The police then took him to the Police Station in Sapele; when he fainted, he was then rushed to hospital where he died.”

But family members of the deceased disagreed with the police’s narrative.

A brother of the deceased, Chief Michael Okor, while speaking to journalists, said “that was not true, you know the police like fabricating stories.

Chief Ayomanor is a very peace-loving man. What would he need a gun for?”

Chief Okor, however, said that the family was waiting for the autopsy, adding, “We will talk after the autopsy.”

Chief Ayomanor, the deceased, was reported to have recently defected from the All Progressives Party (APC) to the Peoples Democratic Party (PDP).

Meanwhile, tension is said to be mounting in Sapele over the alleged extrajudicial killing of the community leader as some youths loyal to him are threatening to cause mayhem.

“We will burn down the police station if the autopsy states otherwise.

We know the police killed him” one of his followers, who crave anonymity, threatened.

As of the time of filing this report, reports said security operatives were keeping surveillance on the ancient town in their numbers to forestall a breakdown of law and order.