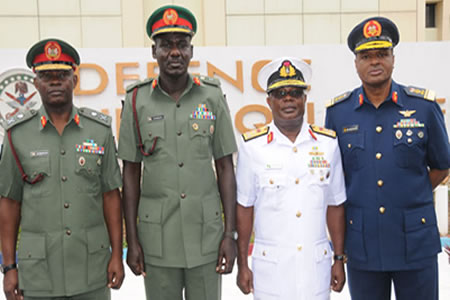 Confirmation of ex-service chiefs and top military officers did not sail smoothly on the floor of the Senate, Tuesday, as the Minority leader, Enyinnaya Abaribe drew the attention of the Senate on the implication of such confirmation on its integrity, if a petition against the nominees was ignored.

The Chairman, Senate Committee on Foreign Affairs, Senator Mohammed Bulkachuwa had said in his report to plenary said that the “nominees were very knowledgeable and articulate in their response to questions directed at them by members of the committee.

He went further to say that “the committee has carefully and thoroughly screened the five nominees and is satisfied with their exposure conduct and character and experience and general performance.”

The Senate Minority Leader, Enyinnaya Abaribe sought the leave of the Senate to caution the upper legislative chamber from enmeshing itself in a controversy that will rub-off on its integrity.

He pointed out that the Senate has on three occasions resolved that these ex-service Chief be sacked and it would be better for the Senate to rescind that decision to pave way for confirmation of the presidential nominees.

In his comment, the minority leader said “I will like the chairman to give us some little explanations, page 2 it says petitions from two persons, am not aware of the second petition but the first petition from Ogaikon Dickson. I got a copy of it.

“I had thought that the committee would have given us a little inkling on the petition and the reason why it was dismissed because that first petition borders in the integrity of the Senate.

“What that petition clearly states is, that this Senate took a resolution that these men should be removed as heads of the security apparatus in Nigeria, not just once but three times we took that decision here.

“And for the same people to be brought back, to us to be confirmed for another appointment, that the Senate is under obligation to look at the resolutions that it has taken before we go ahead to say we dismiss and we go ahead.

“That is why I wanted the committee Chairman to go tell us what informed their decision.

President of the Senate, Ahmed Lawan, overruled the minority leader as he explained that both matters are not related.

Lawan explained that: They have not been nominated to serve as service chiefs, they have been removed, which I think is a plus for this Senate because that is at least looking like it is in compliance with our resolutions.

“If they have been nominated for something else, I think Our resolution asking for their removal as service chiefs does not cross over to that nomination.”

The President of the Senate went further to suggest placement for the service chiefs and urged the Federal government to post them to neighbouring states with similar experience of terrorism.

His words: “My feeling is, let us advise the executive to use the experiences of these retired services or nominees if they are eventually confirmed as ambassadors to be posted to countries where they can add value to this country.

“Especially, countries that surround us, where we use to fight Boko Haram insurgency and banditry because of their experiences in the field, they should be able to interact sufficiently and advice and create the atmosphere together for partnership and cooperation between Nigeria and this country.

“I think that call is that the nomination cannot be nullified because we said they should be changed,” Lawan stated.