Entertainment
By Femi Oguntayo On May 1, 2021 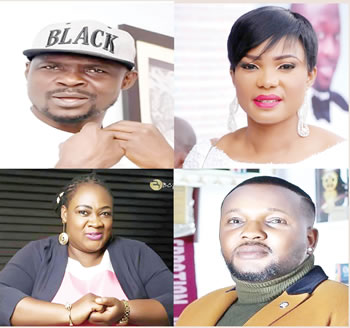 Last week, Nollywood actor Olanrewaju Omiyinka, popularly known as Baba Ijesha, was arrested by the Police in Lagos State for allegedly defiling a minor – a 14-year-old girl. He was reported to have confessed to the crime, as he was also caught on CCTV camera sexually handling the victim in the house of the complainant.

According to the PPRO Lagos State Police Command, Muyiwa Adejobi, the case was reported on April 19, 2021, by one Princess Adekola Adekanya, popularly known as Princess Comedian, at the Sabo Police Station. The matter was transferred to the Gender Unit of the state CID for proper investigation.

The matter has, since then, generated a lot of heated dispute online, especially among Nollywood actors. It took a lot of them by surprise and they also condemned the act. In a turnaround of event, over the week, a Nollywood actor, Yomi Fabiyi aired an unpopular view as regards the Baba Ijesha rape case, which escalated the whole issue, as he was quoted to have requested for the CCTV footage that implicated the said suspect and that he is of the opinion that Baba Ijesha didn’t rape the victim and that people shouldn’t jump into conclusion.

This has not gone well with a lot of Nigerians who were already calling for the immediate prosecution of Baba Ijesha. It also degenerated to a very heated clash between Fabiyi and popular actress, Iyabo Ojo as the latter condemned totally the former’s opinion, saying “he was mad”. Iyabo Ojo called him out, lambasting him for putting up a write up demanding the CCTV footage of the sexual molestation of the victim.

“If your daughter was the victim here, would you be requesting that the CCTV footage be released for everyone to watch? Or are you saying Princess and the family of the girl don’t know their daughter when they see her,” she asked him in a live video she had on her Instagram page.

She went further to say: “why didn’t you wait till when the matter gets to court? If you hadn’t done that write-up, Foluke Daramola or some of our colleagues wouldn’t have shared it, I wouldn’t have done that video because I was patiently waiting, just like you claimed to be waiting before you now quickly jumped to the conclusion to now paint a scenario that it may be or it may not be. “Fine, Baba Ijesha is a senior colleague, but I will not support rubbish. I will not because I know someone and keep quiet or try to cover up for the person in the face of injustice. Baba Ijesha is a disgrace to the whole Yoruba industry, to ANTP, to TAMPAM and I will not cover him up. I will say it again, that your write-up was a flop Yomi.”

The matter became clearer to a lot of people after Princess made a video recently, explaining how the whole issue started. According to her, after she lost her marriage and had challenges which made her childless, some people who were so passionate about her entrusted the victim and five other children to her care, she also explained how Baba Ijesha defiled the minor, who started behaving strangely afterwards.

She said: “The child started failing in school, I paid for private lessons and when I told my family, they told me we should pray, maybe it is spiritual. But I kept on saying that something is wrong, this child has changed. My friend talked to the child again to know what was going on, it was then she explained to us what happened. I was shocked.

“So as to get concrete evidence to nail him (Baba Ijesha) aside from the testimony from the girl, I had to contract a CCTV Company to install CCTV cameras in my house. When he later visited me, I then asked everybody to go out and stay in a neighbour’s house and leave just the girl at home. She (the victim) was afraid, but we told her to calm down.

“So, when he came in and saw that there was nobody at home, I told him I want to see DSTV people off and I will stay long. I dropped my phone, went out and locked the door. Two seconds after I locked the door, he stood up; begin to check my whole house to be sure that none of the children was inside sleeping. I can’t begin to relay the things that he did, I was shaking because we were monitoring it on the phone. Police came immediately and picked him up. I asked him, Lanre, what is my offence? You know I didn’t give birth and the children were in my care so I won’t be thinking and you did something like this to me? He said it is the devil and that I am his benefactor. I challenged him about what happened seven years ago, but he was just begging me…”

Actress, Foluke Daramola Salako was also reported to have shared the write-up by Yomi Fabiyi on the issue and said people should wait patiently and not jump to the conclusion over the matter. She, however, apologised for how things turned out after “she was misquoted and misjudged to share the same view with Yomi over the matter.”

She later released a video to apologise and also clarify her stance on the issue as she said she never knew it was comedian Princess that was involved and said she would never support a rapist and according to her “Baba Ijesha must go down for this.

“I was a victim of rape, so I have been there and will never support rape or a rapist. What I was saying was that we should have something concrete before we start saying anything. Because I know how rape cases interest people a lot and it will definitely result in a lot of emotional controversies. Obviously, I have been misquoted and misjudged; I will never support any immoral act such as rape. I just felt that we should be patient enough to get concrete evidence so we can get justice for the little girl so that the case won’t just die like the previous rape cases,” she said.

The leadership of Theatre Arts and Motion Pictures Association of Nigeria (TAMPAN), led by Bolaji Amusan (Mr Latin) has also released a statement condemning the act by Mr Omiyinka, aka. Baba Ijesha and promised to support the government “in its bid to do justice towards ensuring that such ignoble acts are checked within our society.”

Among notable actors in the Nigerian movie industry who have also joined in the conversation and also in solidarity with comedienne Princess over the issue are Femi Adebayo, Ronke Oshodi Oke, Ibrahim Chatta, Femi Branch, Toke Makinwa, Helen Paul and many more.

How my background, people influenced my music ― King Sammy

How African music can regain its place with blend of Reggae, Afro music ― Marvelux…