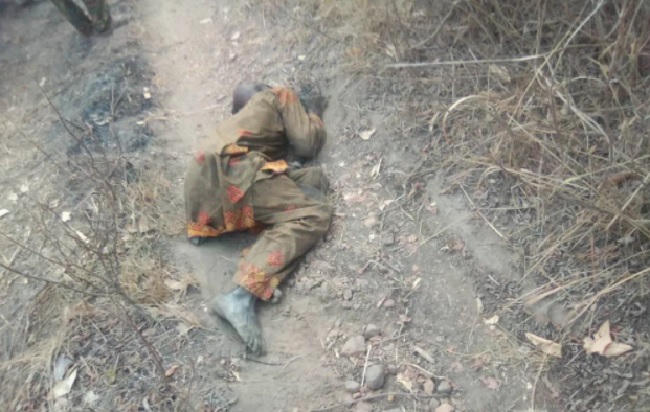 A 65-year old man, Bashiru Akinlotan, was found dead about 20 metres away from his razed 12 acres cocoa plantation, in Igangan, Oyo State, on Wednesday.

The circumstances that led to Akinlotan’s death however remained unclear as of Thursday.

While some claimed that yet-to-be-identified assailants snuffed life out of Akinlotan after razing his plantation, others held that the victim may have died out of the shock of discovering that his farm had been set ablaze.

Family members were said to have become edgy when the deceased who had gone to the farm did not return, only to later discover the corpse.

The matter was said to be reported at the Igangan Police station after which the corpse was released to the family at about 8 pm Wednesday.

When contacted, the Spokesperson for the Nigeria Police, Oyo State Command, Olugbenga Fadeyi, confirmed the death.

He said the plan of the police to conduct an autopsy on the corpse to unravel the death was frustrated by the deceased family who insisted on burying the corpse according to religious rites.

He, however, called on the members of the public with useful information to make the same available to the police to unravel the mystery surrounding the death.

Fadeyi said: “As we were told, he went to the farm and he didn’t return on time. The people traced him and found his corpse along the path to his farm, not too far from there but not on his farm.

“And then they checked his body and there was no mark of violence according to the report. No wound, no gunshot or nothing.

“They called the police and the police went there, took his corpse and wanted to take him to the mortuary for an autopsy but the family members refused claiming they didn’t want any vacuum and then they said they needed to take the corpse away for burial according to Islamic rites.

“And when they insisted the police had to release the corpse to them.

“Notwithstanding, an investigation has commenced and police is looking into the matter.

“If there is any information to unravel the mystery surrounding his death, people should come out and give us to assist us in our investigation.”

The Secretary of Igangan Farmers Association, Mr Taiwo Adeagbo, alas Akowe Agbe, said he led those who reported the case to the Divisional Police Officer (DPO) at Igangan Police Station.

“We met him dead around 5.30 pm about 20 metres away from his 12-acre cocoa plantation. Bashiru Akinlotan was about 65 years of age.

“We reported to lgangan Police Station, the corpse was released for burial by 8 pm. He must have been strangulated and his farm was burnt,” Adeagbo said.

Also speaking on the incident, the Oyo State Security Network Agency (Amotekun) said the deceased met his untimely death while he trying to quench off the fire on his farm.

The Corps said the deceased was not attacked by any herder or any other person.

“It happened that his cocoa farm with his cashew farm was set ablaze, wherein he met his untimely death while he was trying to quench off the fire.

“He was never attacked by any Fulani or other person.”

The Federal Government is owing the university workers, under the National Association of Academic Technologists (NAAT), the Senior Staff Association of Nigerian Universities (SSANU) and the Non-Academic Union of Universities and Associated Institutions (NASU), over N150 billion earned allowances…Controversy as 65-year-old farmer found dead in Igangan