PoliticsInside Aso RockInside the Senate
By Osaretin Osadebamwen On May 26, 2021 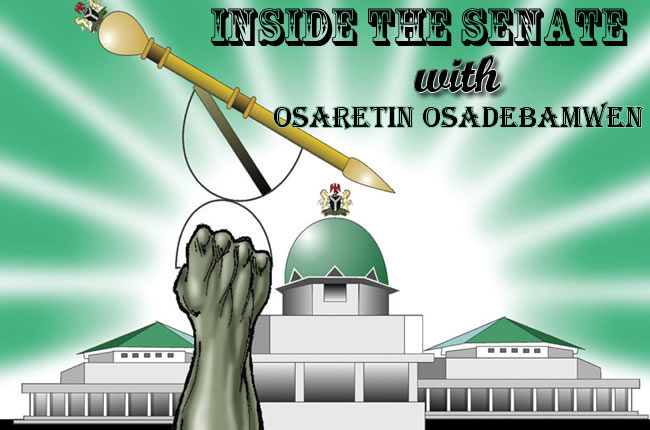 UNTIL June 1, 2021, the Senate will remain on break, following the announcement of the chairman of the National Assembly, Senator, Ahmed Lawan. The period is to enable senators mobilise her constituents to present their strong views to the Constitution Review Committee on the thirteen thematic areas. It was indeed a busy week for the parliament, especially the Senate. Plenary was tasking with the flurry of activities and the committees were not faced with anything less. However, three major issues cropped up: two from the chamber and the other from the committee of the red chamber.

The issues are the constitutional review matter and the bill that seeks to penalise Nigerians for paying ransom to kidnappers and the third issue from the committee – the concern for increased death Nigerians.

The three issues was of great interest and concern to the Nigerian people. Firstly, the Constitutional review matter that had senators distributed to the respective zone in demand for changes. The email domain is google, given the impression that should the mail be compromised, the constitutional review documents are already in the hands of foreign persons. The areas of concern in the constitution review are the quest for true changes include; fiscal federation and revenue allocation; local government and its autonomy; gender equality for women and girls. There is also the public revenue, Nigerian Police and Nigerian security architecture, as well as comprehensive judicial reform; electoral reforms; socio-economic and cultural rights as contained in Chapter 2 of the Constitution. The list also comprise strengthening the Independence of oversight institutions and agencies created by the constitution or pursuant to an act of the National Assembly; residency and indigene provisions; immunity; National Assembly and state creation. Nigerians are to send their memoranda based on these areas.

Shifting from the constitutional review that seeks to properly amend the constitution to give every member of the Nigerian society a sense of belonging, a senator fouled the air with his bill seeking to penalise Nigerians who pay ransom for their loved ones in the hands of kidnappers. It was big blow of some sort from the legislature to members of the public that saw the Terrorism Prevention Bil as a bitter pill. The bill seeks to arrest criminal activities, especially in kidnappers was the penalty it imposes on the grieving public. The bill which scales the second reading offered legislators the opportunity to look critically at the subject matter as the state of national security makes it difficult for anyone to hold back when in dire strait. The Nigeria police has been so burdened with internal security that it has been unable to risk to the occasion. The roads are not safe anymore. A clear example is the road from Abuja to Kaduna. Many public servants have abandoned the road and elected to use train not because of its predictability in the days of operations to Kaduna but more for safety.

Only recently, the chairman Senate committee on Foreign Loans, representing Edo Central, Senator, Clifford Odia was, ambushed on the road from Edo to Abuja but for his security. Again, several relations of victims have reported to the security agency whose officials had advised them to pay ransom for the sake of their loved ones. Such examples abound because the state cannot guarantee the public, therefore a law as Senator, Francis Onywwuchi, who represents Imo East, was proposing to outlaw ransom payment would only hurt the public more who risk losing family members to such an attack in the future. The law was not in anyway populist.

Another seeming succour to the public was the concern of the Senate over the high mortality rate in the country. The twin chamber committees on health thought they had to establish a legislative network for Universal Health Coverage aimed at improved healthcare for the population and by extension provide the needed funds. The committee said: “This actions by the Legislature have become critically necessary as the country’s mortality indices have remained extremely high with minimal improvements, despite the magnitude of resources contributed to improve the statistics.

These and other issues of the health sector are the things the summit on health by the legislators plan to settle at the fourth annual legislative conference.

MAY 29: 22 years of walking in the wilderness