•as govt removes 1,269 health workers including 100 doctors from payroll 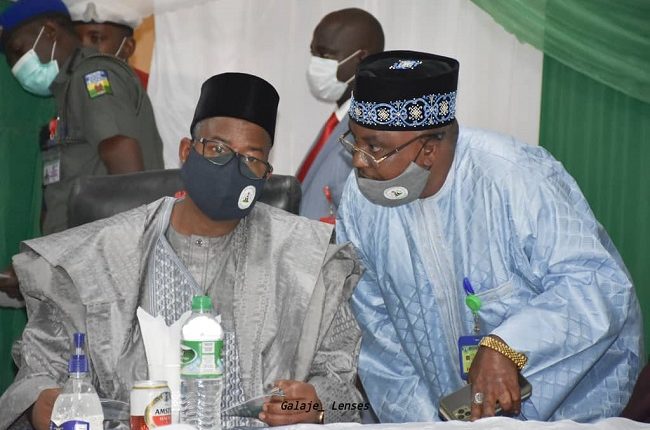 As the hunt for ghost workers who are monthly draining the purse of Bauchi State government continues, a total of 1,279 staff have been uncovered and removed from the payroll of the Ministry of Health just as ghost pensioners in the state have been overpaid with more than the sum of N700million within one year.

The revelation was made by the State Governor, Sen Bala Abdulkadri Mohammed during a media /public parley with stakeholders on problems associated with the management and payment of salaries of civil servants, held at the Command Guest House Bauchi on Thursday.

A visibly annoyed Bala Mohammed declared that with the embarrassing discovery, heads must roll in the state Civil service, saying that among the health workers removed from the payroll are 100 medical doctors.

He said that the State is currently facing a monumental task of sorting out what is clearly a corrupted salary regime stressing that the state civil service has suffered from systematic attrition which is bastardized by fraudulent practices and outright corruption.

The Governor added that “What appeared to be a first simple issue of sanitizing the nominal and payroll and sorting out the arithmetics, suddenly turned out to be a problem and seems to defy all nominal formula that will bring a solution. The problem is much more challenging than I envisaged”.

He explained that “In the year 2015, the salary bill of Bauchi State, both state and local government was N4.5 billion, as I address you today, we are nearing N7 Billion. We have not employed at all, even when civil servants have died or retired, but we still continue to experience a spontaneous rise in the payment of salaries”

Bala Mohammed added that “In the ministry of education, we have 6,000 staff reflected on the payroll while the Head of Service has a record of 5,000 staff which was sent four days ago to the ministry. There is the case of 110 staff whose salaries were stopped from the state treasury due to inconsistencies recorded between their nominal and payroll records”.

He announced that he has received many petitions that some unscrupulous individuals were collecting N250,000 to illegally employ and inflate the State payroll.

The Governor further said that “I won’t spare the local government pension officers, they are responsible for most of these messes we found ourselves in, they must definitely be punished if found culpable.”

Bala Mohammed expressed sadness over the bottleneck being faced by the workers and the senior citizens of the State. He, however, remain adamant that resources of the State be freed to pave way for employment of fresh graduates after a decade of no engagement into civil service.

In his opening presentation, the State Commissioner of Finance, Umar Sanda Adamu said that when Governor Bala Mohammed came into office in May 2019, he made a promise to sanitize the payroll of the state civil service because the number of civil servants in the state was over-bloated.

The Commissioner added that the Governor set up a committee to look into the problem of ghost workers and sanitize the payroll, adding that findings of the committee were mind-boggling where one person collected double salaries and insertion of names of persons that were not supposed to be in the payroll.

While giving a detailed explanation of the problem, A financial consulting firm, DYNATECH Solutions Limited which was contracted by the State Government to sanitise its payroll and nominal roll uncovered monumental corrupt practices over the years describing the situation as most unfortunate.

DYNATECH disclosed that the sum of N744,000,000 has been siphoned out of the State treasury saying, “Some of these pensioners are not the beneficiaries of the money. There are inexistence accounts of inexistence banks .

The Head of Service, Ma’aji Abubakar acknowledged the fraud in the civil service and said that there is one Abba Tijjani who was found to have been collecting between N100,000 to N250,000 to offer illegal jobs at the Ministry of Works and Transport.

He also said that the suspect confessed to the offence and has collected well over N2 million from the illegal act of sabotage.

The HoS further said that the DYNATECH’s revelation was really embarrassing, decrying that some workers were found on local, state and federal governments payroll. Ma’aji also promised to intensify the fight to sanitise the civil service.