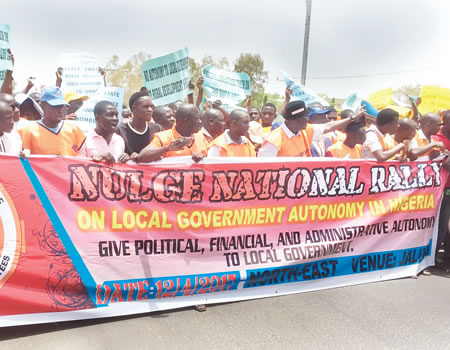 The Nigeria Labour Congress (NLC), will lead the Nigeria Union of Local Government Employees (NULGE), the Nigeria Union of Teachers (NUT) and the Medical and Health Workers Union of Nigeria (MHWUN) to the 36 states of the federation to mobilise, protest and sensitise Nigerians on the importance of local government autonomy and the need to ensure that the state houses of assembly vote in favour of the provision in the on-going constitution amendment.

President of NULGE, Comrade Ibrahim Khaleel, disclosed this to journalists while speaking on the efforts being taken by the NLC and its affiliate unions to ensure that members of state houses of assembly also vote overwhelmingly for local government autonomy like the members of the National Assembly.

Specifically, Khaleel said sensitisation would be directed to the members of state legislatures, while their constituencies would also be implored to impress it on them to toe the same line by the members of House of Representatives and the Senate, by saying yes to local government autonomy because it is a popular demand.

The NULGE president said “NULGE commends the Senate and the House of Representatives for voting in favour of local government autonomy despite tremendous pressure from strong vested interest groups, which regrettably include few state governors.

“The duty before us as workers is to ensure that the state houses of assembly toe the line of the National Assembly to answer the cries of millions of Nigerians who are yearning for freedom of the third-tier of government in the country.

“To this extent, the Nigeria Labour Congress, the Nigeria Union of Local Government Employees, the Nigeria Union of Teachers and the Medical and Health Workers Union of Nigeria (MHWUN), have all resolved, under the NLC to mobilise the 36 states of the federation and the Federal Capital Territory (FCT), to protest and sensitise the members of state houses of assembly to be on the part of history by also voting overwhelmingly for local government autonomy.”

He said the union, as well as millions of Nigerians were surprised at the outburst and reaction of very few undemocratic governors to the “impressive and courageous move” by the National Assembly to vote for the freedom of the local government according to the wishes of the majority of Nigerians.

He regretted that some of the governors still reacted negatively to the noble idea, but he assured them that the will of the people will prevail.

“If the state houses of assembly so desire financial autonomy and to be free from the stronghold of the governors; and the National Assembly, voted for it, we believe that the same legislators at the state level will not deny local government its own freedom, when the time comes for them to play their own role.”

He added: “Interestingly, the state houses of assembly will still vote on all these issues and provisions, including financial autonomy to state assembly and local government autonomy, we believe they will not be selfish to only vote in favour of their financial autonomy, and not vote also for local government autonomy. At least, what is good for the goose is also good for the gander.”

“We therefore call on the members of the 36 State Houses of Assembly to be on the side of the people and history by displaying the courage of their colleagues at the National Assembly by giving their unqualified support.

“We also call on all the governors of the 36 states to sheathe partisan or insular considerations and support these amendments in the national interest.

We call on other Nigerians whose support is invaluable, to rise and mobilise support and should spare no effort in ensuring that these amendments become law.”

The NULGE boss reminded the state legislatures to be aware that there would be pressure from “some of these undemocratic governors” who still want to continue to strangulate both local government and state assembly for their selfish reasons.

“We urge them to be courageous and to know that they have the backing of Nigerians,” he said.

While giving the many benefits of local government autonomy, Khaleel said it would ensure that the local government system develop as a third tier of government with the capacity to discharge its constitutional responsibilities to its constituents; while also strengthening democratic decentralisation of power and put power back in the hands of the citizenry at the grass roots level of governance.

It will also deliver development to about 180 million Nigerians, stem rural-urban migration; lower crime rate and quicken payment of salaries, pensions and gratuities.

He commended the leadership of NLC, the NUT, MHWUN for coming together in harmonising their common position to confront the challenges in the Local Government.

Khaleel urged them to continue in solidarity and oneness for the struggle to actualise full autonomy for local Government in Nigeria; adding that part of their struggles is to ensure that teachers’ salaries are put on first line charge.

Edo govt to collaborate with NDE on job creation