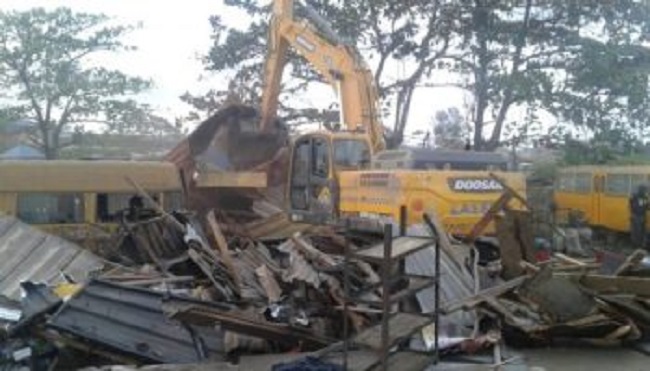 There was pandemonium in Monkey Village, around Opebi, Lagos on Thursday as a team allegedly from the Lagos State Taskforce moved into the community and demolished residents’ houses.

The demolition exercise which commenced around 9 am, some residents said took them unaware as there was no prior notice to that effect.

Some of them said they had already gone to their workplaces before recieving emergency calls from neighbours that their houses were being demolished.

It was gathered that makeshift houses and shops in the community  were levelled by the taskforce, while residents were prevented from moving close to the scene.

Some of them later moved in to comb the rubble for their valuables.

It is believed to be a private land occupied with the understandng of the owners.

When Nigerian Tribune contacted the spokesperson, Lagos State Building Control Agencies (LASBCA), to find out if the agency authorised the demolition, one Mr Taofeek who responded claimed ignorance of the whole exercise, saying that the taskforce was not from the agency.

Responding to the allegation by one Mr  M.O. Ubani on social media that his ministry ordered the taskforce, Commissioner in the Ministry of Environment and Water Resources in Lagos State, Tunji Bello, said his ministry did not have such a taskforce.

Besides, he said he had no taskforce on any land matters or “vehicular issues and does not deal with any of the issues.”

Another resident, Rose, said she was not at home when the demolition team moved in, but was later informed by neighbours.

On getting to the scene, she lamented that she and other residents were not allowed to move out their valuables despite lack of prior knowledge.

“We never received notice from the Lagos State Government to quit before now,” she said, confused as to why government would pick December 31 when people are in the New Year mood to carry out the act.

She said the ICT centre and library in the community were also pulled down.