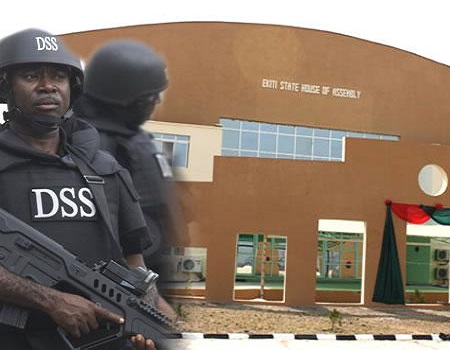 A gale of confusion is currently sweeping through the Ekiti State House of Assembly following allegations by the members, which prompted the Speaker, Kola Oluwawole, to announce the indefinite closure of the house.

Right Honourable Oluwawole, who addressed newsmen on Thursday in company with 17 other members of the house, claimed that policemen were deployed in the assembly complex allegedly on the orders of the Commissioner of Police in the state, Mr. Bello Ahmed when there was no need for it.

According to Oluwawole, the armed anti-riot policemen were deployed in the house at about 9 pm on Wednesday and alleged that members of the house, who recently defected to the All Progressives Congress (APC) were to be blamed for the act.

The Speaker said: “This is strange in democracy, for lawmakers to wake up and see unauthorised police deployment in the legislative arm of government. On Wednesday at about 9 pm, police authority deployed two detachments of heavily armed policemen to the premises of the Assembly.

This came to us as a shock, because we are in recess and such action was unwarranted.

“The Assembly and the Clerk had reacted to a letter purportedly written by the latter calling for police deployment. We have told police authority in clear terms that such document should be treated like a forged document because the Clerk could not have written any official letter without consulting with me, he worked closely with my office as a Speaker.

“Before now, we had it on good authority that police were planning to provide cover for the three defected lawmakers to perpetrate violence in the Assembly and cause confusion as well as endanger the lives of our staff.

“As we speak, the lives of our people are no longer safe, because the police and APC thugs have laid siege to Ekiti Assembly and under this circumstance, our staff are no longer safe and we declare indefinite closure of the Assembly pending the time security can be guaranteed.

“We have not recovered from the harassment and abduction of our members by police during the July 14 election. But let me say expressly that such strange police deployment was unsolicited, unwarranted and ultra vires.”

He said the public should be on notice of what he referred to “the antics of the opposition and their alleged resolve to cause confusion in the Assembly,” explaining that there was no legislative duty in the assembly until members resume from their recess on October 8, 2018.

The speaker said a letter dated July 26, 2018, had been written to the Commissioner of Police, saying via the letter they had lodged a complaint of forgery against one of the defected members and his alleged call for illicit deployment of policemen in the assembly.

He added that the Clerk of the House, Mr. Tola Esan, had, also on July 26, 2018, written similar letter dissociating himself from the letter purportedly written by him requesting police cover at the Assembly.

He urged the police authority to investigate the issue and bring the culprits to justice.

However, during a visit to the Assembly complex at about 10.00 am, there was no presence of policemen at the complex, with sources claiming that they had been withdrawn. However, the premises was under lock and key.

Also speaking, the Chairman of the House Committee on Information, Dr Samuel Omotoso, said 23 members of the Assembly were behind the Speaker and Governor Fayose.

“As you can see, we have 23 members of PDP out of 26 solidly behind the Speaker and our governor. We hereby pass votes of confidence in their leadership. We remain unshaken in our resolve to protect democracy.

“You can see that 18 of us are here, but the Deputy Speaker, Hon. Sina Animasaun and Hon. Dada Celilcia, are in Lagos on official assignments, while Hon Titi Owolabi has just lost her husband; Hon Ojo Ade Fajana is out of the country and Hon Tope Fasanmi travelled with the governor to Abuja, so we are united and strong.”

When contacted on the telephone, the Public Relations Officer of the Ekiti State police command, Mr. Caleb Ikechukwu, said there was nothing wrong with the deployment, saying “anytime you see the deployment of policemen it is to ensure the safety and the security of that place and the people there.”

Ikechukwu said there was no need for people to be curious about the deployment of security men in the quest to ensure the security of life and property, except for those who have some form of crime to hide.

He said “anytime you see us doing deployment, it’s for a reason; it’s to ensure the safety of that place at a given time. That means there must be information which we are working with. And what that shows is how proactive the Nigeria Police Force is.”

On the alleged letter seeking for deployment of policemen to the house, Ikechukwu said “are you now meddling into our internal affairs? Anybody that disclosed that information is disclosing a secret information and that person should be arrested and prosecuted.”

Lead us out of APC, Kwara stakeholders ask Ahmed