Commuters express concern over indiscriminate dumping of waste on road 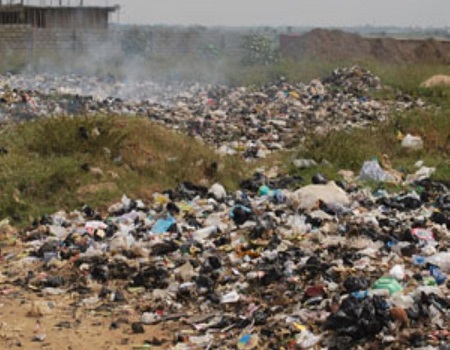 Some commuters plying the Apapa-Oshodi Expressway on Friday expressed displeasure over indiscriminate dumping of waste by residents and traders on the highways.

Speaking with the News Agency of Nigeria (NAN) in separate interviews in the Mile 2 and Cele axis of the road, they appealed to the Lagos State Government to do something urgently to curtail the menace.

Miss Oluchi Peter, a student, said that the sight of dirt in different corners of the roads in Lagos was disappointing.

“I keep seeing heaps of stinking refuse along the road. I don’t know why people would dispose dirt in such a wrong manner.

“Government needs to do something about this by cleaning up the roads and punishing anyone seen disposing of waste in wrong ways,’’ she said.

Mrs Glory Chima, a nurse, said that it was unhealthy to have heaps of dirt on the road.

“It’s really a bad thing to have one exposed to such waste as it pollutes the air and gives a smelly atmosphere,’’ she said.

Mr Agada Matthew, a civil servant, said that the indiscriminate waste disposal was not good for the health.

“It is polluting the air and land,’’ he said.

Matthew appealed to the government to employ more workers so the state can be rid of dirt while sensitising the residents about the health implication.

A trader, Mr John Soyobo, said: “Everywhere in Lagos is littered with waste, turning every corner of the road a dumping site for waste. The government needs to clean up the roads.’’

He said that such development was unhealthy and should be tackled quickly in the interest of the residents.

Worried by the indiscriminate dumping of refuse by residents, the Lagos State House of Assembly had on Monday called on Gov. Babajide Sanwo-Olu to fully enforce relevant environmental laws against the practice.

The House made the resolution following a motion moved by the Majority Leader, Mr Sanai Agunbiade, representing Ikorodu I.

The lawmakers expressed displeasure that some Lagos residents were dumping refuse in drains and on road medians, causing flooding and destruction of roads.

Agunbiade said the house noted the effort of the state government toward addressing the challenge and the campaign against indiscriminate refuse.

He said that some unscrupulous individuals had, however, continued to dump refuse indiscriminately.

The lawmaker said that arrest and sanction should be used as deterrence.

He called for enforcement of relevant sections of the environmental laws in the state.

Agunbiade said the House suggested that offenders be given community service sentence directed at a refuse clearing within the locality of the offence.

Mr Abiodun Tobun, representing Epe Constituency I, noted that despite government efforts, some people had refused to change their attitude toward complying with the relevant environmental laws in the state.

Tobun noted that laws that allowed community service should be enforced.

The Speaker, Mr Mudashiru Obasa, called on the state governor to direct the Ministry of Environment to ensure enforcement of the relevant environmental laws in the state.

Obasa had asked the Clerk of the House, Mr Azeez Sanni, to write the governor on the resolution of the House on the issue.

Join me in rebuilding Sokoto, Tambuwal appeals to opposition