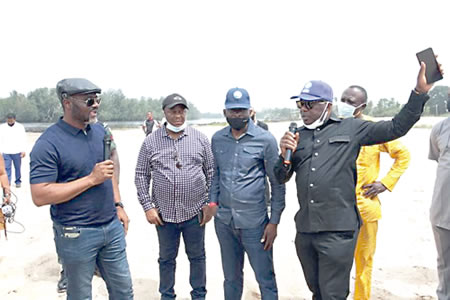 The Abalama community in Asari-Toru Local Government Area of Rivers State has applauded the Niger Delta Development Commission (NDDC) for executing sand filling and reclamation project in the area.

Speaking during a pre-commissioning inspection by NDDC officials, the traditional ruler of Abalama, King Atikinson Big Tom Tom, noted that the NDDC had saved the community from perennial erosion and flooding.

The traditional ruler, who spoke through the community secretary, Mr Harry Forsbrey, said the reclamation project was very important to Abalama people because it had increased their land space.

He, however, appealed to the NDDC to also award shore protection contract to ensure that the reclaimed areas are not washed away over time.

Another member of the community and the contractor for the project, Chief Michael West, commended the NDDC for giving his people more land to live on, noting that the area which was previously a mangrove swamp, had been sand-filled.

He said the contract, which was awarded in 2014, had been completed with the reclamation of 214,653 square metres as well as perimeter containment bund wall for the areas reclaimed. The project, he added, included construction of concrete line drains.

Speaking at the project site, the NDDC’s Director of Project Management Department, Mr Julius Tonye-George, restated the resolve of the commission’s interim administrator, Mr Efiong Akwa, to ensure that all ongoing projects across the region are completed and inaugurated for the benefit of the people.

The NDDC inspection team, led by Tonye-George as the chairman of the Project Commissioning Committee, included the Director of Rivers State Office, Mr George Ero; the Director of Community and Rural Development, Dr Prince Alazia and project engineers.

Tonye-George said his team was mandated to inspect ongoing and completed NDDC projects spread across the nine Niger Delta states in order to ensure that they are handed over to the benefitting communities.

He stated that as an interventionist agency, the NDDC would endeavour to leave its footprints on communities in the NDDC mandate states working in collaboration with the state government.

Tonye-George expressed satisfaction with the performance of the contractor handling the Abalama reclamation project, whom he observed is an indigene of the town, noting that it would assist the community to gain more land after reclaiming what was eaten up by coastline erosion.

The team leader described the completed projects as not only commendable, but a testimony to the commitment of some local contractors to the objective of delivering quality projects to the people.

The contractor for the Ogbakiri Internal Roads, Hon. Emma Chinda, affirmed that the NDDC had transformed the community and brought it back to life after many years of communal crisis. He remarked: “There was total dilapidation of facilities, including electricity in Ogbakiri before the NDDC intervened and helped us to rebuild our town.”

Chinda thanked the NDDC Interim Administrator for ensuring proper supervision of on-going and completed projects, which, he said, had compelled contractors to sit up and deliver quality projects.