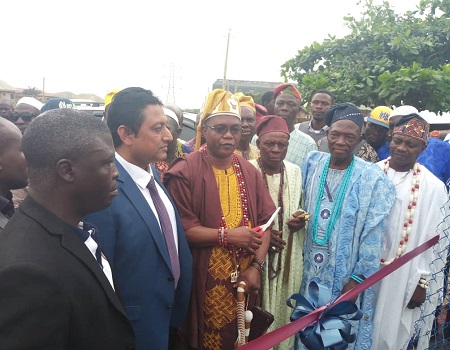 In a bid to provide the residents with stable electricity, a construction company has donated a 500KVA transformer and 100 electric poles to two communities in the Sagamu Local Government Area of Ogun State.

Residents of Ipetoro and Ewu Oruku communities in Ogijo area of the state eaved a sigh of relief when the company based in the community, Everest Metal Nigeria Limited donated the facilities on Wednesday.

Managing Director of the company, Vikas Chandra Das told newsmen during the commissioning that the electrification projects was to assuage the untold sufferings the residents have undergone as a result of lack of electricity in the communities.

Das hinted that the company, as part of its corporate social responsibility, had provided free medical treatment for the over 300 residents of the community.

He assured that the company would not relent in giving necessary support to the community.

He said: “I received members of the two communities in my office together with the SRADEV and we discussed how to solve the allegation of polluting the environment, we reached on an agreement and my company fulfilled it.

“In fact, when we discussed another way round to help the community, we promised them 100 poles and one transformer but it was not on our promise to do the installation and connection of wires but we still did it for them as extra”

While speaking during the commissioning, Ologijo of Ogijo, HRM Oba Kazeem Olaonipekun Gbadamosi assured that the electrification projects will be properly guarded against vandals.

Oba Gbadamosi added that the company has to be very supportive in the construction of many projects in the communities including the building of community centre, the drilling of a borehole.