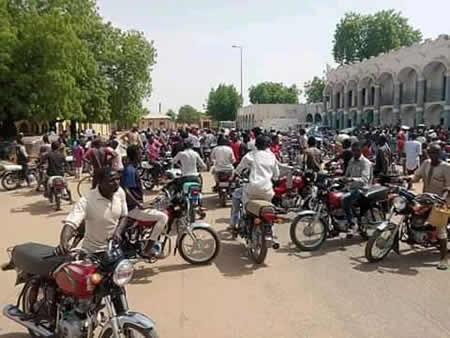 Hundreds of commercial motorcyclists popularly called ‘Achaba’ trooped out on the streets of Azare, headquarters of Katagum LGA in Bauchi State to demonstrate the ban imposed on their operations by the state government.

The riders rode along the main streets of Azare before terminating the procession in front of the Palace of the Emir of Katagum where they delivered their protest for onward transmission to the state government in Bauchi.

They are demanding that the government should allow them to continue to do their legitimate business of commercial motorcycling in the state stressing that they are using it to take off their respective families thereby reducing the unemployment rate in the state.

Umar Musa who spoke on behalf of the motorcyclists said that they have faced untold hardship since the ban on their operation was imposed adding that many families have been thrown into positions of discomfort as the breadwinners can no longer put bread on the table.

Umar Musa said that government can put in place rules to regulate their operations which he assured that they are ready to abide with.

No official statement was made by the Emirate neither was there any information as to who received the protesters at the Palace as the Emir is said not to be around.

It will be recalled that two months ago at the height of the COVID-19 pandemic in the state, the state government imposed a ban on the operation of commercial motorcycles in the state and promised to replace them with 500 units of tricycles known as ‘Keke NAPEP.