•Law breakers will be punished ― OYRTMA 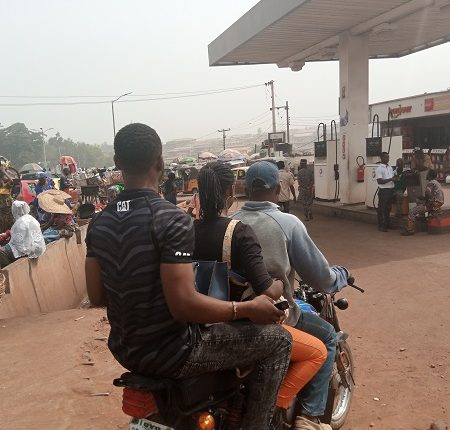 Indications emerged on Tuesday and Wednesday that majority of commercial cab drivers, motorcyclists and tri-cyclists in Oyo state flouted the directive by the state government to disallow them from carrying more than one passenger in the front seat and on the bike.

On Tuesday, the Oyo State Road Traffic Management Authority (OYRTMA), began the full-blown enforcement of the directive tagged “Operation One Passenger”. To this end, Tribune Online visited major locations in Ibadan, the state capital, and discovered that there was low compliance with the government’s directive, although, in the metropolis, few erring drivers/cyclists were apprehended and taken to the OYRTMA state office.

Tribune Online gathered that the motorists gave economic hardship as the main reason for violating the traffic rules. A motorcyclist, Mr Samuel Okunloye at Gate axis of Ibadan, said the rule is a mixture of comfort and gain. According to him, “The government plans that we and passengers must have comfort while onboard; only that it is painful to note that passenger will not want to pay higher than the normal bill.” Similarly, a Micra driver and a motorcyclist at Mokola Roundabout explained separately that commercial motorists will only obey when OYRTMA operatives are around. At Gate, around 12:00 p.m. on Tuesday, for instance, all the commercial vehicles and motorcycles plying Adegbayi and Alakia areas carried two passengers, even on the first day of the full-blown enforcement of the directive.

In his reaction, the chairman of OYRTMA in the state, Mogaji Akin Fagbemi, said there was no going back in the implementation of the directive, adding that the state governor, Mr Seyi Makinde, put the measures in place to reduce road accidents in the state. He expressed the magnanimity of the government to have embarked on education and enlightenment on the directive since December 1, 2019 having reached an agreement between the government and the leadership of seven commercial drivers and riders’ unions in the metropolis.

He said, “commercial motorists and motorcyclists carrying more than one passenger on the front seat and on bike or tri cyclists carrying passenger beside themselves will be arrested and prosecuted for violating Oyo State Road Traffic Law. Some of those apprehended today gave economy as main reasons for non-compliance.

“About seventy per cent of the accidents on our roads nowadays come from overloading. We reached an agreement with them that full implementation would start in January. So, none of them could feign ignorance of the directive.  Before there can be an enforcement of any law or directive, there must be awareness. We have done this using different media of communication.”

Speaking on the penalties for violating the traffic laws, Fagbemi said the vehicles, motorcycles or tricycles would be impounded by the authority, depending on the gravity of the offence committed. He pointed out that the offences committed vary and that “Apart from ‘One passenger’ issue, some do not use crash helmet, some resist arrest.”

He, therefore, assured that no stone would be left unturned to ensure that motorists, especially commercial ones, strictly adhere to the traffic rules.