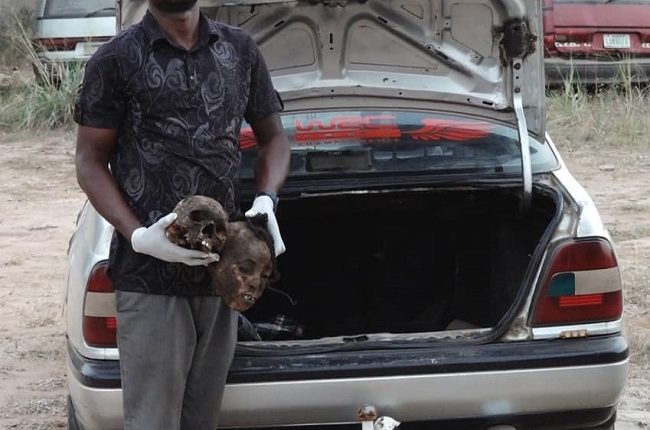 The state commander of the agency, Haruna Gagara, while parading the suspect said the suspect was arrested by NDLEA officials along Owo/Akure road in the early hours of Sunday.

He disclosed that the two skulls were concealed in a neatly packed brown carton during a routine search by the men of the NDLEA.

But the suspect who said he has been plying the Akure-Okene route for the past 15 years denied the ownership of the carton which contained the two heads.

He explained that the carton was given to him at Lokoja park to deliver to someone in Akure motor park, denying knowledge of the content of the carton and the owner of the item.

“The carton was handed to me at the Lokoja park by someone and requested me to give it to the person whose phone number was written on the carton. I know nothing about the skulls.”

He denied knowing the recipient of the carton, adding that the man who gave the item to him just dropped it and walked away.

Meanwhile, the NDLEA Commander, Gagara has ordered the immediate transfer of the suspects to the state Police Command for further investigation and prosecution.

However, the State Police Public Relations Officer (PPRO), Mr Tee Leo Ikoro, confirmed the arrest of the suspects, saying the NDLEA officials have handed the suspect to the command.

Ikoro said the command has commenced an investigation into the matter and said the suspect will be charged to court within the next 48 hours.

In spite of the huge investment in the water sector by the government and international organisations, water scarcity has grown to become a perennial nightmare for residents of Abeokuta, the Ogun State capital. This report x-rays the lives and experiences of residents in getting clean, potable and affordable water amidst the surge of COVID-19 cases in the state. | human skulls

How I escaped from kidnappers’ den, 14-year-old boy recounts experience in Ondo