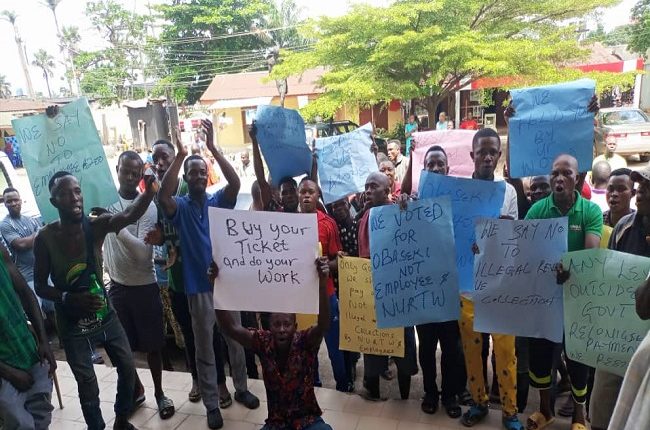 Hundreds of commuters were on Monday left stranded in Benin City, Edo State capital, as commercial bus and marked taxi drivers withdrew their services in protest against alleged extortion by members of the National Union of Roads Transport Workers (NURTW) and Road Transport Employers Association of Nigeria (RTEAN), outside their official daily payment of N400, approved by the government.

Many commuters who were rushing to resume work for the new week, had to be rescued by people who used unmarked vehicles, known in local parlance as ‘kabukabu’.

The commercial drivers took their protest to the premises of the Nigeria Union of Journalists (NUJ) where their leader, Richard Owali, said the protest was informed because “the government told us that the ticket we will pay daily is N400. NURTW N100, RTEAN N100, local government N100 while state government also collects N100 then if you are moving to another local government area, you pay extra N100.

“Our problem is that after paying this N400 to the state government account, these two unions still send their men to our parks and forcefully collect N200 each from us and if you don’t pay, they will beat you and throw you into the gutter.”

He added that “when we challenged them, they mobilised more of their members from several parks to attack us, we are tired and we want the government to come to our rescue. the government should tell us who to pay to.”

Also speaking, another driver, Emmanuel Makachi, said: “Most of our drivers have been injured; many of them are not here because of the injuries they have sustained.”

Makachi’s claim was corroborated by another driver, Victor Edosonmwan, who added that “what we do is balance and carry and we have agreed to pay the amount as stated by the government but for over two weeks they have been beating anyone of us who doesn’t pay. The government did not tell us that these lions and tigers will come back to the road again. We are scared of working now.”

All efforts to reach the leadership of the two unions were not successful as all the calls to their numbers were not answered.