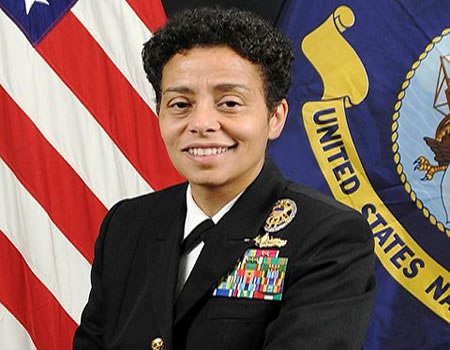 The Admiral will also meet with Nigerian graduates of U.S. service academies and deliver a presentation on women, peace and security at the Nigerian Defense College.

“Nigeria has over 450 miles of coastline and their central location in the Gulf of Guinea makes their Navy a key player in the fight against illicit maritime activity,” said Howard. ” I’m visiting to discuss the security challenges and deepening our relationship in training and exercises,” Howard said.

The visit will allow Howard to talk to Nigeria’s leaders about the significant contributions they can make to confronting security challenges and enhancing stability throughout the region.

Admiral Michelle Howard graduated from the United States Naval Academy in 1982 and from the Army’s Command and General Staff College in 1998, with a Masters in Military Arts and Sciences.

She took command of USS Rushmore (LSD 47) March 12, 1999, becoming the first African American woman to command a ship in the U.S. Navy.

On July 1, 2014, Howard became the first woman promoted to the rank of four-star admiral in the U.S. Navy. That day she was also appointed the 38th vice-chief of naval operations (VCNO), making her the second highest ranking officer in the U.S. Navy.

When university eggheads brainstormed on the national question