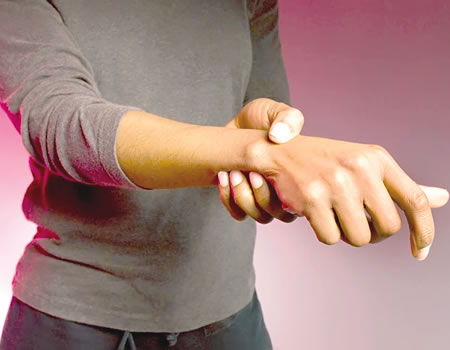 Many people with arthritis dread the cold and rainy seasons. Their joints tend to be exacerbated. But experts in this report by SADE OGUNTOLA say that arthritis occurs all over the world, in all types of climate and that there is no evidence to show if weather or climate has any effect on the ailments.

Many people with arthritis dread the cooler months because it is literally a period they experience more pain. The increase in intensity of pain robs them of life’s simple pleasures.

Even the basics of getting through the day, like getting into the commercial bus, lifting heavy bags or even climbing the stairs, can become sharp reminders of their limitations.

Arthritis, a condition many wrongly assume is just a part of the ageing process, which affects millions of people globally. It causes pain and inflammation in joints, commonly the hands, feet and knees.

The condition, which also causes tenderness and stiffness, restricted movements of the joints, warm red skin over the joints and sometimes weakness and muscle wasting, most often develops in adults who are in their late 40s or older.  Notably, it is also more common in women and people with a family history of the condition.

There are different types, but the most common type of arthritis is osteoarthritis. As people age, the cartilage that cushions the joints gradually wastes away, leading to painful rubbing of bone on bone.

In some instances, injury to a joint can also trigger osteoarthritis, even many years later.

Rheumatoid arthritis occurs when the body’s immune system attacks the joints. The joints and inflamed tissues then become stiff, painful and swollen.

Some develop reactive arthritis after catching a viral infection such as the flu. This usually clears up on its own, but can last for months.

Weather and arthritis, a myth?

However, some people suffering from arthritis don’t look forward to the cold weather. They are of the view that the symtoms of arthritis such as the pain and swelling in their joints tend to worsen with cold seasons.

Nonetheless, researchers have said that weather plays no part in the symptoms associated with osteoarthritis even though people with the health problem report that their symptoms get far worse in cold seasons.

“Many people believe that pain and joint stiffness increases with cold season, but scientifically there is no scientific evidence to back this view,” said Dr Michael Okunola, a consultant, orthopaedics and trauma surgeon, University College Hospital (UCH), Ibadan.

Although there is no direct relationship between cold weather and an exacerbated arthritis, Dr Okunola stated that there are a number of postulations or theories why cold weather may cause joint pain.

According to him, “One theory being proposed is that during cold weather, the atmospheric pressure is reduced and that allows the joint structures to swell. And then there is increased pain from the nerve supply to the joint.

“The other proposed theory is that during cold weather, the sympathetic nerves respond in such a way that the blood vessels in the limbs and generally in the body constrict to minimise heat loss and to keep warm the core of the body, where vital organs are.

“But the increased activation of these nerves in response to cold weather might also lead to an increase in the pain intensity a person feels around his joints.”

Moreover, the expert explained that in cold weather, there is less of activity.

He added, “if there are instances when you do not move your joints regularly, the symptoms tend to accentuate the pain and stiffness because one of the ways of reducing symptoms is to keep moving your joints and that is why regular exercise is advocated for persons with arthritis.”

Mood changes occurs more in cold season, and therefore, the brain can misinterpret it and then pass wrong signals to the joints and that may increase the symptoms.

Ultimately, “the fact that when it is cold and rainy outside, people tend to stay indoors more and the level of activity is reduced allows their minds and attention to be more on the pain and stiffness in their limbs. So, they may feel that their joint is giving them more pains,” he added.

Dr Okunola added: “From onset, you should have a positive mind that your quality of life can be better, that you can leave with it successfully. This is to be coupled with regular prescribed exercise, being active, taken enough water to be properly hydrated and keeping weight under control.

“There are some other medications they have to take such as pain killer, but they need to seek medical assistance for the management of the pain.”

Pain is a protective mechanism to stop further damage, but arthritic pain doesn’t mean you should dive for the duvet and quit exercising altogether.

By bundling up the affected joint with say a bandage, he added may be helpful for some cases of arthritis.

Bundling of joint not effective in every case

“As a theory proposed, cold weather, the vessels around the joints are constricted, so if the joint is kept warm or generally you keep your body warm and you are active, this will increase blood supply to the joint and as such there may be some benefits.”

Meanwhile, other myths experts have dispelled include normal exercising like  jogging can cause arthritis, all varieties of arthritis worsens with age, eating acidic foods, such as oranges or tomatoes could make arthritis worse as well as red wine is protective against arthritis.

Of teenagers in prison custody