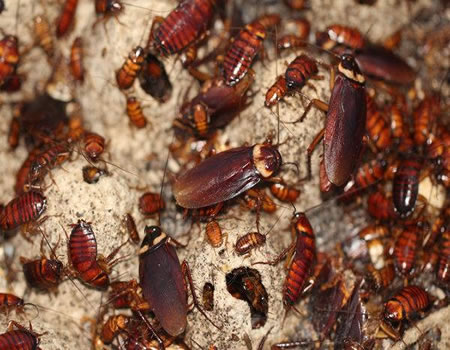 “They are tougher than steel, yet weigh much less, and some spider silks can be stretched up to three times their length without breaking,» she continues. For these reasons, Garbs and colleagues have been studying this incredibly thin and resilient material, aiming to find out what gives spider silk its strength and versatility.

In 2018, Garb and colleagues received a $335,000 grant from the National Science Foundation for their research on spider silk. By unlocking its secret, the investigators hope that they will be able to come up with a formula for next-generation biomaterials.

“For example, these materials could be used to improve helmets and body armor or other protective equipment, medical devices like prosthetics, bandages, and sutures, even sports gear.”

The much-maligned cockroach also appears to be full of potential when it comes to aiding health research. Reports from last year indicate that in China, there are cockroach farms, in which entrepreneurs allow cockroaches to breed freely in a thoroughly sanitized environment.

Cockroach brains may have antibiotic properties.

However, the farm seals the fate of these poor critters. When they reach maturity, the “cockroach farmers” ground them into a paste that is supposed to help treat gastrointestinal problems.

This practice has its roots in ancient Chinese traditions that claim cockroaches can have a therapeutic use. But is this true?

According to preliminary research conducted in 2010 by investigators from the University of Nottingham in the United Kingdom, the brains of cockroaches and locusts contain no fewer than nine molecules that could kill potent, antibiotic-resistant bacteria. The investigators tested the American cockroach, as well as two different species of locusts.

“We hope that these molecules could eventually be developed into treatments for Escherichia coliand MRSA [methicillin-resistant Staphylococcus aureus] infections that are increasingly resistant to current drugs,” notes Simon Lee, one of the researchers involved in this study.

“These new antibiotics could potentially provide alternatives to currently available drugs that may be effective but have serious and unwanted side effects,” Lee argues.

What cockroach mothers can teach us

Cockroaches could also be our next great source of protein, according to a study featured in the International Union of Crystallography Journal in 2016. One species of cockroach, Diploptera punctata (the Pacific beetle cockroach), actually produces a form of milk to feed its live young.

This milk, researchers have found, forms protein crystals in the gut of the young. These crystals contain a high amount of protein, so high, in fact, that study co-author Subramanian Ramaswamy has referred to them as “a complete food.”

Although the investigator has suggested that the cockroach milk could become a part of the novelty protein drinks arena, he has also admitted that the process would be challenging. Since it is not possible to milk the insects, researchers would have to find a way to produce the milk artificially.

Jennings has studied genetic markers of pregnant female D. punctata to understand what happens at various stages during the insect’s pregnancy.

The new model, the researcher hopes, could have larger applications, and cockroaches could provide cheaper animals that are easier to work with than mammals, such as mice.

“We have over 1,000 cockroaches in a fairly small space, an enormous population compared to what you can keep with mice. The feeding regimen of the cockroaches is the cost of a large bag of dog food that can last for years,” Jennings notes.

Many of us are terrified by wasps, mainly because of their seemingly random aggressive behavior, and because their sting can produce allergic reactions, which can range from mild swelling to full-blown anaphylaxis.

Wasp venom has surprising therapeutic potential against aggressive bacteria and even cancer.

But there is also a curative potential in their sting — at least according to a range of clinical studies conducted in the past few years. For instance, one study published in the journal Toxins in 2015 identified three peptides present in bee and wasp venoms, which, the authors, argue, have applications in biomedicine.

One of these peptides, mastoparan, is present in the venom of hornets, paper wasps, and social wasps. It has antimicrobial and anti-viral properties, among other types of therapeutic potential.

«Mastoparan alone or in combination with other antibiotics could be a promising alternative for combating multiple-antibiotic-resistant bacteria in clinical practice,» the study authors write.

However, the researchers also warn that this peptide can be toxic to healthy tissue, attacking bacteria and surrounding cells alike. «Thus, the development of new strategies to reduce the toxic side effects of mastoparan, thereby improving the feasibility of clinical applications, are required,» the study authors point out.

Another study, also from 2015, suggested that Polybia-MP1 — a mastoparan present in the venom of the social wasp Polybia paulista — was able to inhibit the proliferation of bladder and prostate cancer cells, as well as of drug-resistant leukemia cells.

The peptide does this by poking holes into the membranes of cancer cells, making them “leak” their molecular content.

Even more surprisingly, research from the University of California in Riverside — published last year in Biochemistry — identified a new class of wasp venom peptides, ampulexins, produced by Ampulex compressa (the emerald jewel wasp), which could open a new pathway for Parkinson’s treatments.

The emerald jewel wasp is infamous — it stings cockroaches, first to paralyze them and then to «control» their brain so that the cockroaches become lethargic and easy to manipulate.

I feel giddy when sitting