The Coalition for Nigeria Movement (CNM) has called on Nigerians to reject the Senate’s proposed bill on the Armed Forces Service Commission, describing it as a ‘taboo’.

CNM who made this known at a press conference on Monday in Abuja added that it is unconstitutional for the National Assembly to propose such bill.

Sponsored by the lawmaker representing Abia-South Senatorial District, Senator Enyinnaya Abaribe, the bill will give the Senate authority to appoint Chief of Defence Staff, Chief of Army Staff, Chief of Air Staff, Chief of Naval Staff, Director of Military Intelligence and heads of other arm-bearing security agencies.

The bill will also provide for the establishment of Armed Forces Service Commission, which shall have the power and authority pursuant to section 219 of the 1999 Constitution of the Federal Republic of Nigeria (as amended).

Speaking on behalf of the group, the National President, Mr Sabo Ode argued that Abaribe and his cohorts would have to amend the constitution for this to happen.

The coalition, however, called on Nigerians to rise and defend their democracy and not allow selfish politicians to manipulate the constitution in their favour. 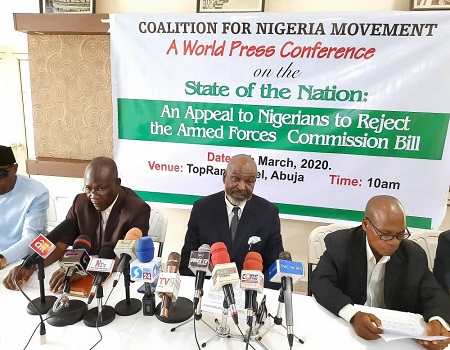 He said “Nigerians cannot pretend aloofness on certain issues. The 1999 Constitution of Nigeria (as amended) spells out clearly areas that the National Assembly is empowered by the same supreme document to make laws.

“And a majority of these parliamentarians are conversant with the cliché recited like national anthem everywhere that any law which contradicts the Constitution of Nigeria is null and void to the extent of the contradiction.

“We expect the lawmakers to know that regardless of whatever they consider as loopholes in existing laws, as long as it is reflected in the Constitution, its wishful thinking that subsidiary laws by an Act of parliament can vacate the potency, effect or functionality of provisions of the Constitution unless it is amended”

He explained: “That Senator Abaribe relied on Section 219 of the 1999 Constitution of Nigeria, but aligned its intendment wrongly gives us a serious cause for concern and not to remain silent. And so, it is obvious that the Senators are attempting to wrest the powers of Mr President in deciding who makes up the list of his Service and Security Chiefs through the backdoor.

“We wish to elucidate that the 1999 Constitution of Nigeria which Senator Abaribe and his co-travellers relied upon to smuggle a Bill very obnoxious to the interest of Nigeria is Section 219. But Sections 217 and 218 of the same Constitution have already settled the supremacy of Mr President in deciding who to appoint into Service Chiefs’ leadership, in compliance with the Federal Character Principle. And the Federal Character principle is also not the same as ethnic or religious character.

“Section 219; Sub-section (b) states that ‘with respect to the powers exercisable by the President under section 218 of this Constitution, by an Act, established a body which shall comprise such members as the National Assembly may determine, and which shall have power to ensure that the composition of the armed forces of the Federation shall reflect the federal character of Nigeria in the manner prescribed in section 217 of this Constitution.’

“However, Section 217: sub-section 3; earlier stipulated that ‘The composition of the officer corps and other ranks of the armed forces of the Federation shall reflect the Federal Character of Nigeria.’

“The Coalition wishes to explain that the phrase in the clause (218) stating that ‘…as may be established by an Act of the National Assembly,’ refers directly to the Armed Forces of Nigeria as may be determined or approved by NASS. It does not suggest the enactment of a fresh law which will whittle or usurp the powers of Mr President in deciding who to appoint into the hierarchy of Service Chiefs.

“In other words, the Section 219 of the 1999 constitution (as amended), as cited by the sponsor of the Armed Forces Commission Bill, Senator Abaribe does not confer such powers on the National Assembly. If NASS finds provisions of Sections 217 and 218 defectives, it must first amend the relevant sections of the 1999 Constitution or may be riding against the tide by this Bill.”

He said, “we, therefore, wish to say in unmistaken terms that the Bill is a taboo that must be rejected by all Nigerians and the National Assembly must be put on notice that no anti-people law will be allowed to see the light of the day in any chamber of NASS.”

PENCOM board: Senator Abaribe, others adamant over opposition to Buhari’s…

Nigeria at 60: People must continue sacrificing for nation’s greatness ― Fayemi