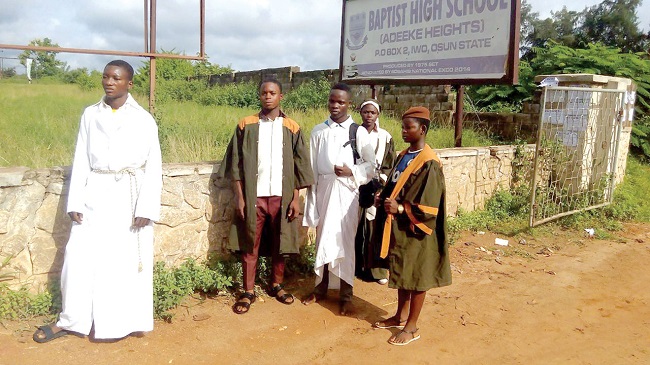 Old students of Baptist High School, Iwo, Osun State (Class of ’79) have completed and handed over the renovated Biology Laboratory to the institution.

At a ceremony on the school premises recently, the old students noted that their ultimate objective was to give back to the school and help make Baptist High School, Iwo, remain at the top in the state and region.

Chairman of the Class of ’79, Mr Jaye Macaulay, who led the students to the inauguration of the building and the hand-over ceremony, said they arrived at the decision of rebuilding the laboratory after meetings with the principals of the school on their priority needs and where they should intervene.

Macaulay said: “The principal told us the areas of their priority needs and we took it up from there. At our own level, we narrowed the needs and agreed to take up the project. Our uppermost objective as a Class is giving back to school and this is closely followed by the welfare of our members.”

He said the class was delighted to complete the project and hand it over for the use of the school and its students, noting that resuscitation and rehabilitation of the disused laboratory was a task his class members saw as an important duty and “devoted enormous resources to the task.”

The structure of the biology lab was totally rehabilitated. Its flooring, tiling, ceiling, plumbing, electrification and painting were done while a new set of furniture was also installed.

The school’s Class of ’79 also said it was also working on putting a maintenance plan in place so as to ensure the sustainability of the laboratory.

Thanking the class while receiving the new building, the principal, Mr. Olugbenga Balogun, expressed delight at the quality of the job done, saying the job had raised the bar and set a standard for other donors.

The second principal, Mrs. O. B. Ayuba, promised on behalf of the school to ensure that the laboratory would be put to proper use for the benefit of the students.

‘Why schoolgirls should get free menstrual products’

No space, facilities for pregnant students in Elizade University ― VC