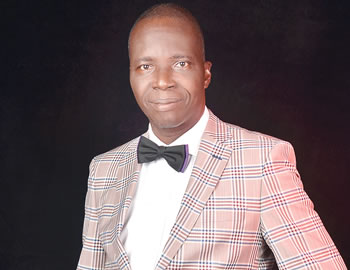 Pastor Oladele Abiodun Balogun is the Pastor-in-Charge of Region 21 of the Redeemed Christian Church of God (RCCG), Covenant Sanctuary, which comprises all RCCG churches in Oyo State. He is also a professor of Philosophy. He shares with RITA OKONOBOH his thoughts on how he balances philosophy and religion, the story of his experience as a pastor, and other national issues. Excerpts:

I was born in Ijebu-Igbo and I attended Moslem Primary School in Ijebu-Igbo, Ogun State, from 1973 to 1979. I proceeded to Ladugbo Community High School, Oke-Agbo, Ijebu-Igbo from 1979 to 1984. After that, I went to Ogun State College of Education for my HSC between 1984 and 1986. Afterwards, I went to the then Ogun State University to study Philosophy, from 1986 to 1989 and to God be the glory, I graduated as the best student of my set. I am a professor of philosophy at Olabisi Onabanjo University, Ogun State, formerly Ogun State University. I have my Masters and PhD degrees from the University of Ibadan.

How long have you been in the ministry?

In the RCCG, we have two categories of ministers – full time and part time. I must state categorically that I am a full time lecturer and a part-time minister. So, my main job is as a lecturer with the Olabisi Onabanjo University. I can’t say I had a calling in the sense of the word since I am not a full time minister. I joined the RCCG in 1983 as a worker, became a minister, then an assistant pastor, pastor, zonal pastor, provincial pastor. I became pastor-in-charge of Oyo province 1. After some time, Region 21 was created by Pastor E.A. Adeboye in 2014 and so, I became pastor-in-charge of Region 21. I grew up as a Muslim before I became born again and joined the church in 1983. I am a full time lecturer, and as a matter of fact, I am the Dean of the Faculty of Arts, Olabisi Onabanjo University.

How do you balance being a philosopher and a pastor?

Not all philosophers are atheists. St. Thomas Aquinas, St. Augustine, among others are philosophers who also believe in God. Philosophy deals with the ability to reason rationally and to separate dogmatism from fact. It is the ability to analyse critically. Even philosophy has helped me to interpret the Bible better. When I pick a verse from the Bible, through the help of philosophy, I analyse. There is no conflict between philosophy and religion. In most seminaries in the world, philosophy is taught.

RCCG Region 21 is popularly described as Noah’s Ark. What is the story of Covenant Sanctuary?

RCCG Covenant Sanctuary started some time ago with one of my predecessors, Pastor Elijah Daramola (he’s presently coordinating RCCG churches in South Africa and is a Special Assistant to the G.O.), who at the time was pastor-in-charge of Oyo Province 1. He was the one God used to buy this land. After some time, Pastor Innocent Utulu, who was a provincial pastor, started the laying of the foundation, and the building project, which was done in 2006. I took over in 2010 and by the grace of God, it has got to the stage it is now. The building will be dedicated on July 10 by the G.O. of the RCCG, Pastor E.A. Adeboye and his wife.

The church has been described, arguably, as the biggest RCCG parish in the world. What efforts have been made to ensure winning of souls to worship in such edifice?

When it comes to structure, you may refer to this church as the biggest, for now. It can seat 10,000 people and depending on the arrangement, it can seat more people. Like I told our workers recently, this is not a monument, nor a museum. We have planned our strategy and we’re intensifying on aggressive evangelism, coupled with the mandate given to us by Daddy G.O. that every church must double its membership. On another hand, the church has come in very handy when we have regional programmes. We have two churches in the Covenant Sanctuary for now – the Yoruba church called Apata Ogo and the English church called Glory House. We have been engaged in personal evangelism and media advertisements to ensure that people come to the knowledge of Christ.

You have mentored pastors. How would you assess the rate at which the RCCG produces pastors and the failing moral standards in society?

The church is playing a major role to ensure that corruption and immorality become a thing of the past, although there is room for improvement. If not for the church, Nigeria as a country would have been forgotten. The church has played a major role in ensuring development. For example, the RCCG has produced the vice president. The number one soldier in Nigeria is a member of the RCCG. The Commissioner of Police of Oyo State is also a member of RCCG. That is just a few that we have mentioned and that is just the RCCG. There are also many examples in other Christian denominations across Nigeria. Corporate Social Responsibility (CSR) activities are also a vital aspect of the RCCG. However, I appeal to all Christians, in whatever position they find themselves, to establish the culture of righteousness even in the face of temptation.

Spousal murder seems to be on the increase. As the South West coordinator of the Redeemer’s Men Fellowship (RMF), how would you advise men on making marriages work?

First of all, we must correct the impression that men are the sole perpetrators of domestic violence. There are women who perpetrate domestic violence against their husbands. However, in the church, such is drastically reduced because the church preaches monogamy, and where one man, one wife is established, domestic violence will be drastically reduced. The RCCG doctrine preaches against divorce so, the earlier one accepts that fact, the better. In fact, as a pastor, if you divorce your wife, you will be dismissed. Adultery is also against the RCCG doctrine. If the soul of a man is regenerated, he will not beat his wife. The whole issue boils down to soul winning and evangelism. If you really love someone, you can’t beat the person. The antidote to domestic violence is for every man to be born again. In the RMF, we preach soul winning and the need for every man to be born again. We also discuss health and family issues.

There is a new trend now in Pentecostal missions. Women are now becoming more outspoken when it comes to the gospel, with some going as far as founding churches. What is the RCCG’s stand on that?

The Bible is subject to various interpretations. Someone who wants to drink alcohol can pick a part of the Bible to support his/her action. Someone who even batters his wife can turn the Bible upside down to justify his action. From my interpretation, the scripture is not against women performing their responsibilities in the church. For example, in the RCCG, women are in all the positions available. We could even say we need more women.

We have female pastors in charge of regions, provinces, zones and areas. However, on the issue of female G.O., God determines that. If that is in God’s plan, it will come to pass. In the RCCG, we have only got two G.O.s so far – the founder and the present G.O. The church is just starting. There is no need to be in a hurry.

Still on the issue of G.O., there are fears that when Pastor Adeboye completes his tenure, the church will disintegrate, especially as it seems that he has no favourites. What are your thoughts on this?

Daddy G.O. is a man full of wisdom and knowledge. God is omniscient and possesses all wisdom. Daddy G.O. has told us not to be fearful about who will succeed him and that when the appointed time comes, RCCG is owned by God and will not disintegrate. It is the Redeemed Christian Church of God, not the Redeemed Christian Church of anybody. When the founder died, God raised Baba Adeboye, and after Baba Adeboye, the church will not collapse. One of the covenants God gave the founder is that when He shall return, he shall meet RCCG. Let nobody be fearful or apprehensive, God has a great plan for RCCG during and after Baba Adeboye completes his assignment.

In the face of the prevailing economic situation in the country, how have you managed to complete the assignment of such a building and how much would you estimate that this project has gulped?

Honestly, it has been God. God promised that He that began the good work will surely complete it. God has been sending people from all over to support the project. In fact, I had thought that with the state of the economy, work would have stopped. Rather, work has continued. It has been God. On the amount spent so far, I would rather not want to state how much.

What challenges have you faced as the head of a large congregation?

Different kinds of people make up a congregation – the good, bad, holy, unholy, weak, strong, among others – and as a good father, you have to manage them all. There have been challenges but with wisdom and the grace of God, it has been possible.

What would be your advice for government and religious leaders?

Let the president and his team seek God. Once we attempt to remove God from the equation, there will be problems. If they have the fear of God, they will rule us well. There should also be no attempt to favour one religion over the other. As the constitution states that this is a secular state, so should be followed. There should also be policies to improve the economy and other sectors of the economy, such as electricity supply, health, among others. There is also the need to pay serious attention to education as a tool for national development.

For the CAN president-elect, Reverend S.O. Ayokunle, since CAN is made up of different denominations, his first assignment should be unification. He should use his position to entrench righteousness. For other religious leaders, let us preach Christ, entrench righteousness and live like Christ. If we’re able to do that, other things will follow.

From poverty alleviation to wealth creation

The church is responsible for the decay in Nigeria —Olopade