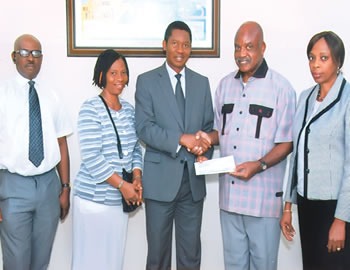 Christian Mission for the Deaf (CMD), a school located in Ibadan, Oyo State, has received a grant of $22,578 from The United Parcel Services Foundation (UPSF), Nigeria.

The cheque was presented by Managing Director of UPSF, Mr Ralph Ozoude, on behalf of The UPS Foundation and was received by the Chief Executive Officer of CDM, Pastor Emmanuel Ilabor.

Founded in 1951 and based in Atlanta Georgia, The UPS Foundation identified the specific areas where its making impact to include; the aspect of profit effectiveness, economic and global literacy, encouraging diversity, community safety and environmental sustainability.

According to the foundation, it is proud to identify and support Christian Mission for the Deaf to assist in building a stronger community and to cater for the physically-challenged in the society.

Pastor llabor appreciated the UPS Foundation for the grant, promising to utilise it judiciously and prudently in the completion of the female dormitory project, which would accommodate over 300 students in the mission.

According to him, “CDM, established in 1960 by the late American Educator and Missionary, Mr Andrew Foster, who pioneered deaf education in Africa, the school is out to cater for the deaf in Nigeria and beyond.

He also stated that currently the school operates from a temporary site located at Onireke GRA, Ibadan, but plans to later move to her permanent site on Kilometre 18, lbadan-Lagos Expressway, Ibadan.

“Majority of our students live in boarding facility with a good number of them from poor backgrounds. This has necessitated the need for a bigger dormitory at the school’s permanent site,” he added.