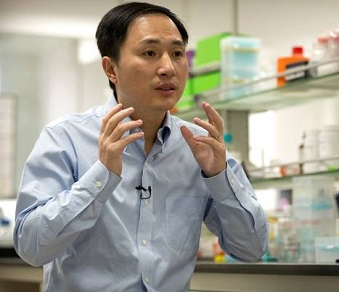 A Chinese researcher claims he has, for the first time in history, edited the genes of two babies in a case with profound medical and ethical implications.

According to a YouTube video posted on Sunday, researcher He Jiankui from the south-eastern city of Shenzhen

says the genes of two Chinese girls had been modified so they cannot be infected with HIV NAN reported.

He said, “the girls, named Lulu and Nana, came crying into the world as healthy as any other babies a few weeks ago.”

He claimed that he performed gene surgery on fertilized eggs using the CRISPR/Cas9 protein with instructions to prevent future HIV infection.

He has yet to publish a paper about the highly controversial procedure.

The Southern University of Science and Technology researcher said that the gene surgery was successful “and no gene was changed except for the one to prevent HIV infection.’’

However, he could not be reached for further comment, while the parents’ and the babies’ identities were kept secret.

He claimed that the father of the babies is HIV positive and wanted to prevent his children from suffering from discrimination.

The announcement, as expected, received a lot of backlash.

“Whether what Chinese researcher, He, claims is true, at present, such attempt and its announcement are to be criticised in the strongest terms.”

Dabrock added that “the secondary and late effects of gene editing are difficult to predict and control.”