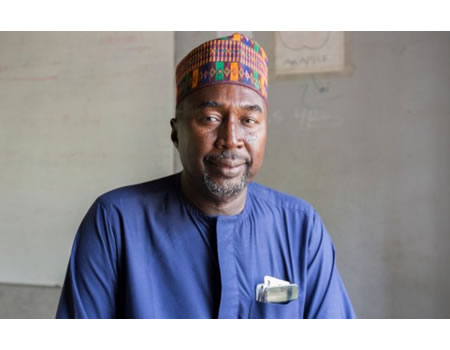 Zannah Mustapha, the Nigerian mediator who brokered a deal for the release of dozens of Chibok school girls captured by Boko Haram, has been named this year’s winner of the United Nations High Commissioner for Refugees (UNHCR) Nansen Refugee Award.

UNHCR, the United Nations’ refugee agency, announced Monday that the 2017 recipient is Mustapha, a lawyer and mediator from Borno State in northeast Nigeria.

The agency said Mustapha received the prestigious award in recognition of his efforts to improve the lives of displaced children and widows upended by the regional conflict with Boko Haram.

“The work Mustapha and his team are doing is of the utmost importance, helping to foster peaceful coexistence and rebuild communities in northeastern Nigeria.”

With this award, we honor his vision and service,” United Nations High Commissioner for Refugees Filippo Grandi said in a statement.

Since Boko Haram launched its brutal insurgency in northern Nigeria in 2009, more than 20,000 people have been killed, thousands of women and girls have been abducted and children have been drafted into the terrorist group’s ranks as suicide bombers.

Up to 2.1 million residents fled their homes in Nigeria at the height of the conflict — 1.9 million of whom are currently internally displaced — while over 200,000 others remain in neighboring Cameroon, Chad and Niger, where they were forced to flee, according to the latest data from the UN.

Meanwhile, tens of thousands of children in Nigeria are growing up without schooling, as the West African nation’s education sector is strained by its swelling youth population, and education facilities in the northeast remain under attack by Boko Haram militants, who have destroyed countless schools and killed hundreds of teachers in the past eight years.

“Conflict can leave children with physical and emotional scars that are deep and lasting. It forces them from their homes, exposes them to unspeakable atrocities, and often rips apart their families,” Grandi said in a statement.

“Education is one of the most powerful tools for helping refugee children overcome the horrors of violence and forced displacement.

It empowers young people, equips them with skills and works to counter exploitation and recruitment by armed groups.”

In 2007, Mustapha founded the Future Prowess Islamic Foundation School for orphans and vulnerable children in Maiduguri, the capital of Borno State and the birthplace of Boko Haram.

The school currently provides free education to 540 students, half of which are girls. Four times as many children are on a waiting list, according to UNHCR.

Amid the growing demand for classroom seats, Mustapha in 2016 opened a second school near the other facility, which now hosts 88 pupils, all of whom have been forcibly displaced from their homes.

Mustapha and 48 volunteer teachers and staff members open the schools’ doors each day, despite the ongoing conflict.

The schools are among the only functional primary education institutions in besieged Maiduguri, according to UNHCR.

“Schools lie at the heart of a society. Destroying them crushes the chance of Nigeria’s next generation succeeding,”

“The recognition of Zannah Mustapha’s brave work highlights the importance of education for the future of Nigeria.”

The students enrolled at Mustapha’s schools receive uniforms and healthcare services. Some are children and orphans of Boko Haram fighters and Nigerian soldiers.

“This is the place where every child matters, no matter what religion, background or culture,” Mustapha explained in a recent interview with UNHCR.

“Our aim is make positive changes in their lives.”

Hauwa Madu, 13, is among the displaced children at the Future Prowess Islamic Foundation School.

Three years ago, Boko Haram gunmen stormed her small home in a northeast village near Damboa and killed her father three years ago.

Her mother, who was pregnant, died in childbirth soon after.

“When I think about my parents I become sad, I miss them,” Hauwa recounted in a recent interview with UNHCR, as tears rolled down her cheeks.

“This school is really like my home now. I can think of tomorrow again because of what [Mustapha] has done for us here.”

Mustapha has also played a crucial role mediating in the past year between the Nigerian government and Boko Haram for the release of 103 girls and young women abducted by the terrorist group from a boarding school in the town of Chibok, Borno State, in April 2014.

The mediator, who grew up in Maiduguri alongside some of Boko Haram’s leadership, escorted 21 Chibok schoolgirls to freedom in October 2016. Another 82 have been released with Mustapha’s assistance, according to UNHCR.

Nigeria: We can only access 1.8m IDPs, UNHCR says, as Daystar donates N10m to support…