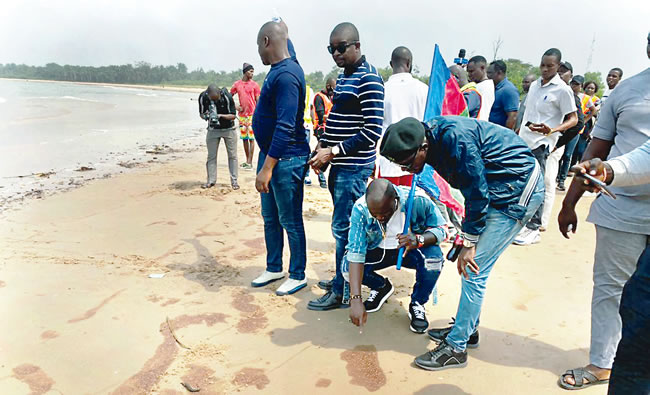 Ijaw Youth Council (IYC) worldwide has accused the Federal Government of colluding with the International Oil Companies (IOCs) to delay the clean-up of multiple crude oil spills that have damaged farmlands and water sources in the Niger Delta region.

The national spokesperson for IYC, Comrade Ebilade Erekefe, stated this during a fact-finding mission to ascertain the cause of crude oil spills that polluted coastal communities of Sangana and Fish-town in Akassa clan of Brass Local Government Area of Bayelsa State.

Ekerefe expressed dismay over what he  described as negligence on the part of the Federal Government to the plights of the  coastal communities on the Atlantic bank affected by the oil spillage which had lasted for close to two weeks.

He noted with sadness the level of destruction the oil spill has caused to the environment and the aquatic life of the people whose means of livelihood is predominantly fishing.

“As you can see, this is the spotted flowing crude oil on the sea and on the shores of the river bank. It is quite unfortunate and provocative that up till now the two major oil companies, Chevron and CONOIL that are operating in this shoreline have not taken responsibility for their negligence,” he said.

Erekefe added that it was sad and unfortunate that a company doing a multibillion dollar business in a community where the livelihood of the people depends on aquatic life would not give the desired attention, especially in their moments of needs.

“Up till this moment, none of them has even sent representatives to come to these communities to interface with them, at least to show empathy in their current travails. The people are passing through serious health challenges and we call on the IOCs to send relief materials, including health workers immediately to save lives. What you’re seeing here is not pipeline vandalism like they’ve always said, this is clearly an equipment failure on the part of the IOCs whose pipelines have been in existence longer than the expiry date. They need to replace them immediately to save our environment,” he demanded.

He warned that the Ijaw Youths Council would go back and take a strong and decisive position that would be backed by all necessary legitimate actions, if needed, to compel the company whose facility had caused the unimaginable damage to own up and take responsibility.

Those who were also part of the delegation are representatives of the Bayelsa State government, NORSRA, Friends of the Earth and environmental rights activist, Mr. Alagoa Morris.