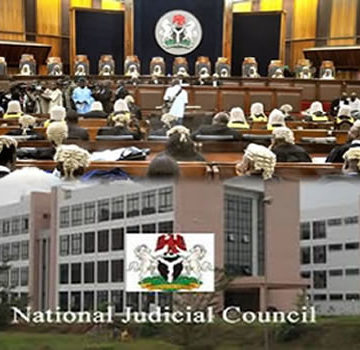 THE Code of Conduct Tribunal (CCT) sitting in Abuja on Tuesday discharged a Justice of the Supreme Court, Justice Sylvester Ngwuta of charges of false assets declaration preferred against him by the Federal Government.

The two-member panel of the Tribunal, headed by Danladi Yakubu Umar, in a ruling delivered yesterday agreed with the argument of Justice Ngwuta that, as a serving Justice of the Supreme Court, he cannot be tried in any court or Tribunal, except after he had been subjected to the investigatory and disciplinary processes of the National Judicial Council (NJC).

The Tribunal, in its ruling in the criminal charges against the Supreme Court Justice, relied on the judgment of the Court of Appeal in the case of Justice Hyeladzira Nganjiwa., which the Court of Appeal held, in a judgment delivered last year, that by virtue of Section 158 of the 1999 Constitution of the Federal Republic of Nigeria (as amended), only the NJC has the powers to try judicial officers for any misconduct while in office.

The Umar led Tribunal held that a judge cannot be prosecuted by any court or Tribunal until the NJC deals with the allegations against him or her and takes a decision of either dismissing such a judicial officer or compulsorily retiring him or her from the Bench.

It consequently quashed the charges against Justice Ngwuta and discharged him of the allegation of false declaration of his assets preferred against him by the Federal Government.

Recalled that the apex court Justice, through his counsel, Kanu Agabi (SAN) had, in a motion on notice filed on January 9, 2018, prayed the Tribunal to invoke Section 158(1) of the 1999 constitution to dismiss the 10-count criminal charges against him.

His ground was that, as at the time the alleged offence was committed, he was a serving justice of the Supreme Court, hence a serving judicial officer within the purview of Section 318 of the constitution.

He insisted that by the combined effects of Section 158 of the constitution and paragraph 21 of the third schedule to the constitution, any complaint or allegation of misconduct against him must first be referred to the NJC, empowered by law to exercise disciplinary control over him.

Ngwuta maintained that the allegations which brought about the criminal charge against him were never referred to the NJC as required by the constitution, hence, the charge is not competent in law.

He cited the decision of the Court of Appeal in the case of Justice Nganjiwa versus Federal Republic of Nigeria where the appellate court held that no criminal investigation or prosecution can be initiated or instituted in any court of law or Tribunal against a serving judicial officer for judicial misconduct without first presenting the allegation to the NJC and a determination made.

Maintaining that the allegations against him were never made available to the NJC as required by law and hence, the charge was incompetent and that the Tribunal lacks the jurisdiction to entertain it.

However, counsel to the federal government Abeni Mohammed (SAN) opposed the application and urged the Tribunal to dismiss it in its entirety.

He further submitted that the claim of the judicial officer was misconceived by the defendant, adding that Ngwuta was put on trial at the CCT as a public office holder and not as a judicial officer.

Besides, Mohammed said that the finality of the Appeal Court decision relied upon by the defendant has not been tested at the Supreme Court.

Mohammed insisted that the decision of the Appeal Court on judicial officers in relation to Section 158 of the 1999 constitution was not applicable to the trial of the defendant because of peculiar circumstances and asked the Tribunal to assume jurisdiction.

The Federal Government had, last year slammed a 10-count charge against the Supreme Court justice on false assets declaration, to which he pleaded not guilty to.