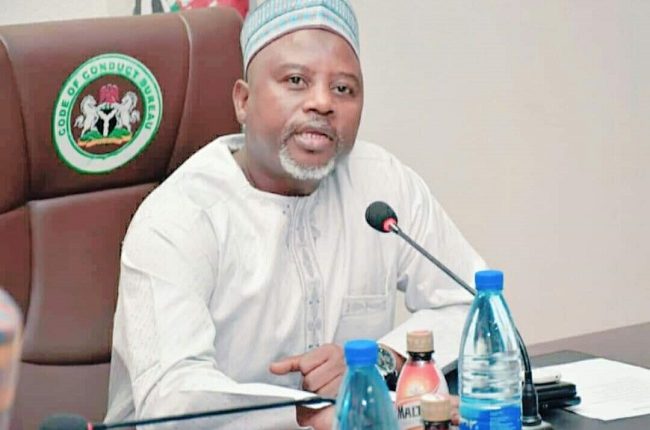 The chairman, Code of Conduct Bureau, Professor Mohammed Isah, on Wednesday inaugurated seven committees on assets verification to verify assets declared by public officials from 2017 to 2020.

Inaugurating the committees, Professor Isah stated that the exercise was consistent with President Muhammadu Buhari’s policy on transparency and accountability in the conduct of government business.

The verification exercise, the chairman said, was intended to verify the backlog of Completed Assets Declaration Forms (CADFs), submitted to the Bureau from 2017 to 2020.

According to him, the exercise shall be restricted to public officers domiciled within the Federal Capital Territory (FCT) in the first instance, adding that the committees had the time frame of four weeks to complete their assignment and submit reports to the chairman.

“This exercise is consistent with President Muhammadu Buhari’s policy on transparency and accountability in the conduct of government business.

“The Code of Conduct Bureau is empowered by Paragraph 3 (B) Part 1 of the Third Schedule to the 1999 Constitution of the Federal Republic of Nigeria (as amended) to examine the declarations in accordance with the requirements of the Code of Conduct or any law,” Isah said.

He noted that the assignment calls dedication, fairness and firmness on the part of committee members, adding that they are expected to maintain a high level of integrity.

“This all-important assignment calls for dedication, fairness and firmness. I know that with your proven track records of diligence, commitment and competence, you will discharge your responsibility dispassionately.

“Bearing in mind the sensitive nature of this assignment and the importance attached to it, you are expected to maintain a high level of integrity. I have every confidence that you will carry out your duty thoroughly.”

Professor Isah informed that the exercise was meant to establish the truthfulness of assets declared with a view to ascertaining the existence ownership and completeness of items declared to the CCB.

According to him, the verification was to ensure that public officials were not engaging in illicit wealth acquisition and that their official actions were in compliance with the provisions of the Code of Conduct for public officers and any other laws relating thereto.

He added that it would afford the Bureau the opportunity to detect a conflict of interest and expose anticipatory/false declarations.

The Terms of Reference of the committees, the chairman stated, included scrutinizing the Completed Assets Declaration Forms (CADFs) of career public officers and all appointed and elected political officers holders with a view to ensuring the veracity or otherwise of the declarations made.

The committees are also to carry out due diligence by cross-checking the declared assets with data domiciled in sister agencies; invite declarants for conference verification; proceed to the field to carry out a physical inspection of assets declared and prepare and submit a report.