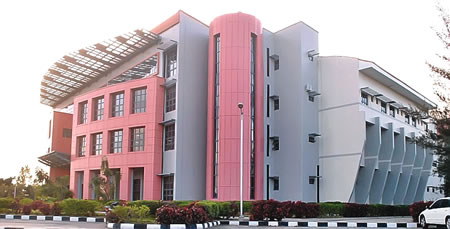 SANYA ADEJOKUN reports that in the last nine years, Central Bank of Nigeria (CBN) has embarked on a centre of excellence project meant to shore up capacity of Nigerian universities. The model is also designed as CBN Collaborative Postgraduate Programme (CBN-CPP). The first phase covers the University of Ibadan, University of Nigeria (UNN) Nsuka and Ahmadu Bello University (ABU), Zaria. On August 22, 2019, President Muhammadu Buhari commissioned the ABU Centre.

MANY years ago, it was commonplace for foreign students to seek better education in Nigerian universities than was available in their home countries. Then, there were only a handful of universities in Nigeria but they were regarded as high quality citadels of learning and highly respected internationally. Now, with a population of over 200 million, Nigeria is the most populous country in Africa with largest GDP of $397.2 billion in 2018. The country had a total of 170 universities as at March 2019 comprising of 43 federal, 48 states and 79 private. Yet it does not have a representative in the QS World University Ranking of 1000 institutions (QSWUR).

A national newspaper in a recent editorial noted that facilities in the Nigeria’s federal universities “have become an eyesore, thereby reducing them to shadows of citadel of learning. As a result, the Academic Staff Union of Universities and students have been protesting for a change to no avail.

“Graphic details of the poor state of infrastructure at some of these universities were front page pictures of this newspaper on July 29: halls of residence at the University of Nigeria, Enugu campus, are overgrown with weeds. At the Usman Danfodio University, Sokoto, pit latrines dot the landscape, while heaps of refuse have taken over the Obafemi Awolowo University, Ile Ife, and its students’ bathrooms have become most revolting.

“At the University of Port Harcourt, its Mandela Hall could be mistaken for a charred prison, while students of the Ahmadu Bello University queue to use the convenience.  Bed bugs feed on the blood of students at the OAU. There, two students engaged themselves in a fight with Sniper recently, over who might have infested their beds with the insect.

“Hostels at the University of Lagos are infested with the same blood-sucking insects, a reminder of the embarrassing students’ riot there over the matter two years ago. It is incredible that 16 students can be crammed into a room at one of the halls at the University of Calabar. The rot is virtually in all the universities.

“The degenerate existence of our universities explains why they are not well-regarded even in Africa, let alone globally. Interventions from the Petroleum Development Trust Fund and Tertiary Education Trust Fund in funding the building of halls of residence, libraries, lecture halls and award of postgraduate scholarships to deserving academics seem to be tokenisms against the background of the degree of the prevailing mess. Quality is critical in university education. These universities should be radically overhauled to attract international students and faculties – two critical criteria that confer universalism on them, from where their origin was derived.”

Vice Chancellor of University of Ibadan, Professor Abel Idowu Olayinka identified said federal universities were the most heavily subscribed options by the teeming candidates over state and privately owned but because of cost, public universities lacked adequate space to accommodate all the candidates. He explained that 10,000 candidates applied to study medicine and surgery in his institution but only 150 were admitted “because we don’t want to compromise the quality that we are producing. If there is money, we can expand the scope, build more hostels and classrooms.”

That story gloomy story is presently being brightened by Central Bank of Nigeria through the injection of N63 billion into the construction of centres of excellence in nine universities across the six geo-political zones. The model is designed to also accommodate the Central Bank of Nigeria Collaborative Postgraduate Programme (CBN-CPP).

The CBN Centre of Excellence was conceived as a world class postgraduate school focused on various business and finance disciplines. The facilities and infrastructure at Centre have been designed as state-of-the-art complexes comprising a faculty building and hostel building.

In conceiving this project, the aim of the bank was to ensure students at postgraduate levels in Economics, Accounting, Banking and Finance, Business Administration and Statistics study in a serene environment that would stimulate effective learning with a view to building human capacity for the financial services sub-sector. The pilot Phase of the project covered the three premier Universities in Nigeria, the University of Nigeria; Enugu, University of Ibadan; Ibadan and Ahmadu Bello University, Zaria. Six additional universities to be picked from each of the six geopolitical zones will also benefit.

The CBN Centres of Excellence was conceived as a world class postgraduate school focused on various business and finance disciplines. The facilities and infrastructure at centres have been designed as state-of-the-art complexes comprising a faculty building and hostel building.

In conceiving the projects, the aim of the bank was to ensure students at postgraduate levels in Economics, Accounting, Banking and Finance, Business Administration and Statistics study in a serene environment that would stimulate effective learning with a view to building human capacity for the financial services sub-sector. The pilot Phase of the project covered the three premier Universities in Nigeria, the University of Nigeria; Enugu, University of Ibadan; Ibadan and Ahmadu Bello University, Zaria.

The CBN Centre of Excellence, Ahmadu Bello University, Zaria sits on a total floor area of 34,102.81sqm with the under listed facilities.

At the commissioning, Governor of CBN, Mr Godwin Emefiele said the bank’s involvement in the funding and infrastructural support in the educational sector was borne out of the conviction that an educated workforce played a critical role in the advancement of the Nigerian economy and the society in general. He said the bank’s analysis of the factors responsible for the growth of successful economies, indicated that investment in education played a prominent role in driving innovation and growth in advanced and emerging economies, while also contributing to significant reductions in inequality. Hence, he said the CBN, being a knowledge-driven organisation, had to ensure the sustenance of improvements in institutions of higher learning across the country.

According to Mr Emefiele, the Centre of Excellence project was also designed to accommodate the Central Bank of Nigeria Collaborative Postgraduate Programme (CBN-CPP), which he described as a child of necessity in the Bank’s intervention programme in the educational sub-sector. He explained that the project was conceived to produce a critical mass of skilled professionals that will be able to apply their knowledge towards supporting growth and continued innovation in our nation’s financial sector and the economy in general. “This was against the recognition that the dearth of skilled manpower constituted a binding constraint towards making Nigeria the number 1 hub for economic activity in Africa, he added.

He also disclosed although the three first generation federal universities were selected under the first phase of the intervention programme, the scheme was later expanded to cover six other tertiary institutions across Nigeria, which are nearing completion with the aim ofensuring that students at post-graduate levels in Economics, Accounting, Banking and Finance, Business Administration and Statistics study in a serene environment that would stimulate effective learning with a view to building human capacity for the financial services sub-sector.

Emefiele disclosed that CBN, working closely with all the participating universities, had taken steps to ensure that this investment yields considerable benefits. Specifically, he said the curricula for the target disciplines had been reviewed and harmonized across board to ensure students are provided with the optimum level of knowledge relative to their peers in other parts of the globe.

“We believe that the Centres of Excellence will help support the government’s efforts towards reducing the incidence of brain drain, and curtail the huge foreign exchange being spent on school fees for Nigerians studying in other countries,” Emefiele said.

While disclosing that the three Centres of Excellence in Zaria, Enugu and Ibadan will commence operation in October 2019, he said the CBN expected the universities to take maximum advantage of the world class facilities provided by the Bank to challenge their counterparts in London, New York and Dubai in the provision of training programmes in banking and finance-related disciplines for the global business community.

He then urged the bank to extend such funding support to research to ensure economic development of the country.

We will launch 20-year development agenda to save Oyo, Seyi Makinde says

Mugabe: His legacy for African leaders

Clean energy investment: Building on the ashes of COVID-19