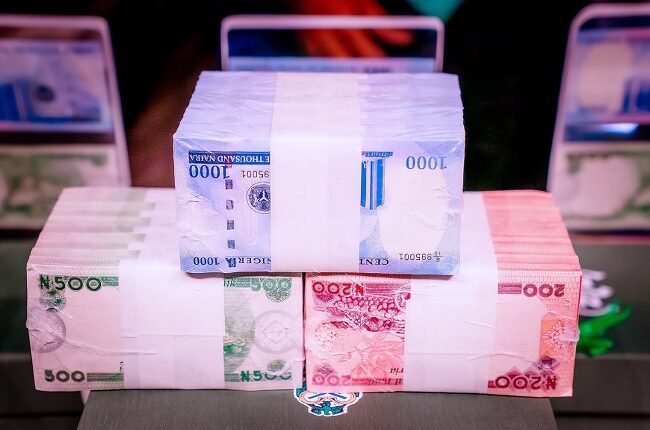 The Central Bank of Nigeria (CBN) has commenced distribution of the redesigned Naira notes to Deposit Money Banks across the country.

Governor, CBN Mr. Godwin Emefiele who disclosed this on Thursday in a chat with Newsmen after he visited President Mohammadu Buhari in Abuja said that the new currencies have now reached the banks and it is expected that the banks will soon distribute those currencies to the members of the public who are their customers.

Emefiele had visited Buhari to assure the president that things are going on well about the currency as well as issues bordering on the newly introduced cashless policy.

According to him, the central bank will be reviewing from time to time how this is working because there is no rigidity, even though there will be no reversal of policy or change in timing.

“But whether it is about tweaking some amount to be a little bit higher or a little bit lower we will do so because we are human. We want to make sure that we make life good for our people.

“We can only continue to appeal to Nigerians to see this policy the way we have presented it. We do not want to make life difficult for them.

“There is no need for anybody to worry. The CBN is monitoring what is happening, and I am assuring everyone that we are alive to our responsibility and we will do what is right for Nigeria and Nigerians,” Emefiele stated.

On the position of the senate concerning the withdrawal limit, Emefiele said the senate is the legislative arm and from time to time, CBN briefs them about its policies, and “I am aware they have asked for some briefings and we will brief them.

The cashless policy started in 2012 he recalled, but on almost three to four occasions, CBN had to step down the policy because it felt that there was a need to prepare and deepen the country’s payment system infrastructure in Nigeria.

Between 2012 and 2022, the CBN believes that a lot of electronic channels have been put in place that would aid people in conducting banking and financial transactions in Nigeria.

“We heard about people talking about some of the people in our rural areas, and the truth is that we have 1.4 million super agents that are all over the country, villages, LGAs, and I am sure some of their names are already on the CBN website and we will publish the names of all these super agents,” he clarified.

Having super agents he added, which is different from the banks, microfinance banks, and other financial institutions, is as good as saying that you have 1.4 million banking points where people can conduct services, and the apex bank thinks that Nigeria as the biggest economy in Africa, needs to leapfrog into the cashless economy Emefiele emphasized.

His words: “We cannot continue to allow a situation where over 85 percent of the cash that is in circulation is outside the banks. More and more countries that are embracing digitalisation have gone cashless.

“When we announced it, we said December 15 will be when we will issue the cash but we had to move it forward. Indeed, it was now November 26th instead of December 15, that the president unveiled it, and I just told you now that yesterday, the banks have received the new cash and they have started dispensing them.”

He assured that it will go around, stressing that the old currency continues to be legal tender till January 31, 2023.

“I want to crack a joke that both the painted and unpainted currencies will operate concurrently as legal tender but by January 31, the unpainted one will not be useful to you again. So please take it to your banks as early as possible.

“But what we have done in the CBN is to move more people from different departments into currency processing, so that they can process these cash as fast as possible and from there banks can now move what they have with them,” he further explained.

The CBN governor disclosed that the president is satisfied with the progress made so far and “no need to fear, no need to bother about anybody,” Emefiele stressed.