Cause of Abule Ado explosion not yet known — Security agents 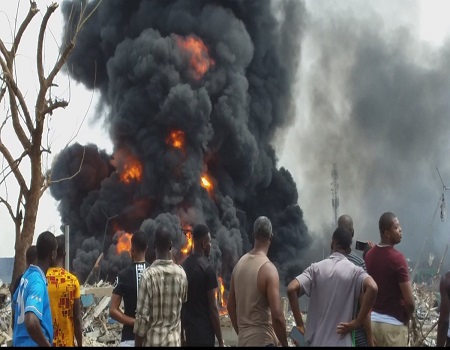 Security and emergency personnel at the scene of Abule Ado explosion in Lagos on Sunday said they were yet to ascertain what caused the explosion which claimed one life and destroyed hundreds of property.

Muawiyah Halilu, Assistant Commander, Police Area ‘E’ Command, Festac Town, told News Agency of Nigeria (NAN) at the scene of the explosion that the cause and casualties were yet to be ascertained.

“From eyewitnesses, nobody can tell if it was a pipeline vandalisation or not, all that we heard was a loud explosion and vibration.

“I cannot give you an exact number of casualties, for now, I only saw one corpse on the ground, the others I cannot say,” he said.

Also, Fasiu Adeyinka, Lagos State Commandant of Nigeria Security and Civil Defense Corps, told NAN that rescue operations were ongoing to get people out of the rubble of collapsed buildings.

“There are casualties but they cannot be ascertained now,” he told NAN.

However, Amuwo Odofin Local Government Chairman, Mr. Valentine Buraimoh, said the explosion might be as a result of technical fault from the pipeline.

“I was informed that it was a technical fault from the pipeline and that it’s not a result of vandalisation.

“There is some army personnel about 20 meters away monitoring the pipeline so it’s not vandalisation,” he said.

Buraimoh noted that some students of Bethlehem Girls School, destroyed by the explosion, were rescued from the scene.

Chairman of the council’s Environmental Task Force, Mr. Akindare Adetifa, urged the government to provide the fire service with the necessary equipment needed to quench the fire.

“Many have been injured and taken to the hospital.

“The firefighters are doing the best they can; imagine using a hose that is not up to 10 metres to quench a fire that is a mile away.

“There is the much they can do without the necessary equipment to fight a fire,” he said.

NAN reports that there were about seven fire fighting vehicles, emergency response agencies, including the Red Cross and National Emergency Management Agency (NEMA), at the scene.

Also, many houses, including Bethlehem Girls School, had collapsed, while houses that were still standing had their roofs either blown away or crushed.

Vehicles were seen with crushed windscreens and dents from the explosion.

Many residents who had gone to church could not go back home while others didn’t have any home to go back to.

A corpse was seen on the ground, close to the scene of the explosion.

None of the agencies on the ground had been able to ascertain the number of casualties recorded and the fire was still burning as at 3:30 p.m. on Sunday.