Castle Lite freezes over Lagos by unlocking JCole, Davido, Wizkid on the coldest stage in Africa 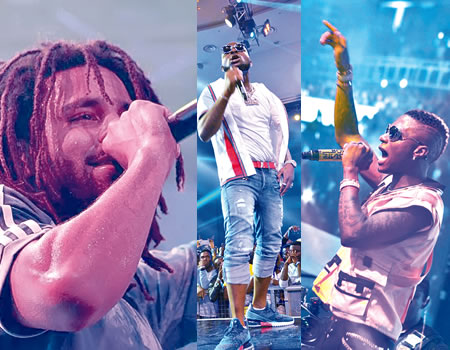 Multi-platinum selling rapper, J Cole, tore the roof with his epic performance at the Castle Lite Unlocks concert which went down at the expansive Convention Centre of Eko Hotels and Suites on  last Friday in Lagos. With thousands of ecstatic fans in attendance, the concert also saw ground breaking performances by some of Nigeria’s finest, Wizkid, Tiwa Savage, MI, Falz the Badh Guy and Davido, with support from DJ Obi, DJ Xclusive, DJ Neptune and Cool DJ Jimmy Jatt on the wheels of steel.

Performing for the first time in Nigeria, the Dreamville top dog, Jermaine Lamarr Cole, charmed the audience by performing hit tracks from his rich repertoire that include, ‘Can’t Get Enough’ (from his studio debut album,Cole World), as well as ‘Role Modelz’, ‘Apparently’, ‘Wet Dream’ (from his recent platinum-selling album 2014, Forest Hills Drive), ‘Deja Vu’, ‘Immortal’, ‘Crooked Smile’, ‘Power Trip’, ‘Neighbors’, and ‘Work Out’, during the show anchored by popular OAP, Do2dTun, and one of South Africa’s finest entertainment personalities, Pearl Thusi.

Speaking to journalists at the once-in-a-lifetime Extra Cold experience, Marketing Director, AB InBev Nigeria, Arne Rust said, “Innovation is what drives Castle Lite as the brand is always at the forefront of technology, making beer drinking easier and fun in every space. As a result, our innovation approach is geared at unlocking new spaces for consumers to enjoy Castle Lite. Also, Nigerian music has over the years showcased its innovative, progressive and extremely expressive streak.  This explains why we have this rich assemblage of Nigerian music stars who push boundaries and do things differently like Castle Lite.”

Very interestingly, J Cole further captivated the hearts of the audience by performing all the songs from his latest album, KOD, for the very first time in Nigeria.

It would be recalled that the rapper dropped his fifth studio album, ‘KOD’ last week Friday (April 20), which spans 11 tracks, including titles like 1985, ‘ATM’, ‘Brackets’, and ’Motiv8’.

J.Cole has twice gone platinum despite not having featured guests on his albums, and KOD looks to be following the same route. Already, KOD, has broken Apple Music’s record for streams in the first 24 hours in the US with 64.5 million streams on its first day.Spotify,music, video streaming service confirmed in a tweet that KOD was streamed 36.6 million times in the US in the first 24 hours, where it also broke the record for most first-day streams in the US for an album. It was such an illustrious spectacle that was on parade in Lagos.

“Castle Lite breaks boundaries and music is a natural fit with the brand’s DNA.  We also appreciate the fact that it represents the biggest passion point for our consumers lives, hence we are always committed to unlocking memorable fan experiences and creating shared value for all our consumers with concerts like this”, Franscoe Bouwer, Castle Lite Marketing Manager, said.

According to Consumer Connections Manager Jumoke Okikiolu, “It has been an unbelievable evening with the best of Nigerian hip-hop on display. This is what happens when Castle Lite joins forces with progressive artistes who are currently game changers. All our consumers here today have had an extraordinary experience and we are proud to have provided a platform for this incredible mix of music to flourish.”

Castle Lite has since 2011 been renowned for bringing music heavyweights that include Drake, Kanye West, Timbaland, Bryson Tiller,Travis Scott, Wiz Khalifa, Nas & Chance the Rapper to the continent, allowing them to share the spotlight with local artistes on the Unlocks platform.