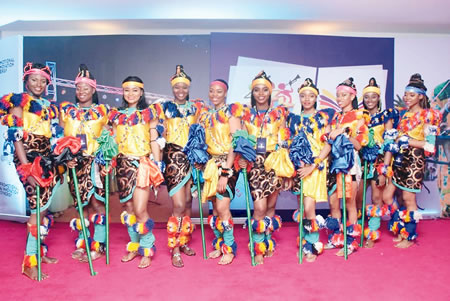 The biggest street party in Africa, Carnival Calabar, the high point of the Cross River State 32 days holiday fiesta came alive with a tip of the ice berg in Lagos, recently.

The unveiling of the theme of the 2018 Carnival Calabar drew audiences from all strata of the society to an evening of entertainment at Eko Hotel and Suites, Lagos.

It was an evening of unlimited performance by different groupS and cultural ensembles that interpreted the theme Africanism beautifully to the ovation of the audience.

Africanism, the theme of this year’s edition was apt to the trends and reality that face the continent (Africa) and in extension its global connection, when we talk about the people, culture, education, economy and history of development looking at the pre and post colonial era and what the future holds for Africa and the world.

The Lagos event was a showcase of what to expect at the 32 days festival, a highlight that did not only show the rich packages and features that await visitors but also bunch of talents, magic and culinary delight of the Cross River people.

Apart from the socioeconomic fiesta put together to keep the city light up for a month plus with different hospitality packages to appeal to different visitors that will take time out during this period, the organisers have continued to add value to the time to be spent by both domestic and international tourists and visitors that have planned to attend the 2018 edition.

According the organisers, from December 26 to 30, different events have been slated to entertain different clusters of audience, stating with cultural carnival; a street parade of Nigerian cultural dance and rhythmes, then comes the Bikers Carnival on December 27; a classical formula K vintage cars, convertables and power bikers carnival street stunt to usher the Carnival Calabar’s adult parade of the bands, a complete theatre on the move with costumes and music float on December 28.

Other high points of the 2018 biggest street party are the International Carnival on December 29, with a cultural procession of foreign competiting bands from famous carnival contingent across the world. While on December 30, the electrifying non-stop grove, the Carnival Calabar street party will keep families, friends, and visitors alive with the best of music, dance, food and drinks with nightlife vibe of the Calabar city.

Speaking at the event, the chairman, Carnival Calabar Commission, Mr Gabe Onah re-affirmed the brand commitment to the people who are passionately the custodians and factors that have sustained the event for years.

According to Onah, “we have interestingly modified a lot of things to make the carnival bigger, bolder and better, and with the energy committed by the  governor of Cross River State, Professor Ben Ayade, more innovations form the content build up to spice up the brand.”

He recognise the different committees and individuals working towards making the 2018 edition a great outing, especially   Senator Florence Ita-Giwa and the International Carnival Consultant, Mr Ikechi Uko, for increasingly improving on the international response and participation.

In her remarks, the chairman of the Carnival Calabar Band Association, Senator Ita-Giwa, said the commitment of the state has been awesome and all hands are on deck to continue to attract global attention through the yearly theme which is carefully picked and used as a yardstick to judge the performance and interpretation of each band.

”These events are marketed individually to allow you to accurately reach more target customers and corporate customers in line with true ideals.”

Not mincing words, the international carnival consultant, Mr Uko, said the turnout has been tremendous in recent years with loyal returnees of foreign contingent and newer ones signifying interest to participate.

“From the brief we have, this year’s edition will be greater than the previous carnival turnout because some countries have started signifying interest to attend.

“Also, we made a journey to understudy the business aspect of the carnival in Rio and what we saw was massive in terms of revenue generation and I am promising you Carnival Calabar is adopting some of those business tips to make the carnival business driven for the state and other allied sectors that connect with it.

The Deputy Consul General, Consulate of Brazil, Helges Bandeira, who came with a seven-man delegation to the carnival theme unveiling said, “I am surprised by the performances and display here tonight and I want to tell you that you have a fantastic brand to change the tourism landscape of Nigeria.

“I also want to commend the organisers for their effort at sustaining the carnival till date, we are happy to associate with Carnival Calabar and the variety of contents you have showcases tonight.”